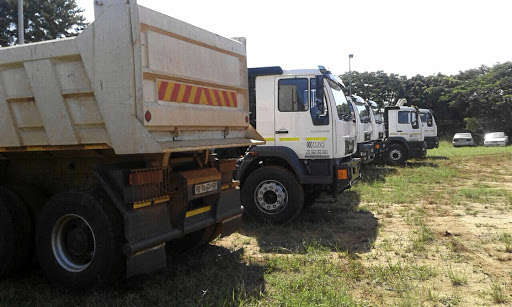 Police intercepted eight trucks with no papers in Mashau village outside Thohoyandou, Limpopo, at the weekend and arrested a man who could not produce papers for the vehicles. / SUPPLIED

The cops have bust what they think is a vehicle-theft gang when they intercepted five tippers and three water tank trucks on private property after a tip-off.

The haul is worth R24-million and was ready for smuggling to Zimbabwe through the Limpopo River.

The syndicate behind the crime, according to the cops, was planning to drive the vehicles across the river.

"The preliminary police investigations have revealed that they were stolen in other provinces and were allegedly en route to be smuggled out of the country.

"We have set up a joint task team which is tracing other suspects who were driving these trucks and also we want to arrest the mastermind behind the cross-border theft," he said.

Ngoepe said the trucks were parked in a private property within the village and one suspect failed to explain how they got to be in his yard.

He also could not produce any paperwork that showed he owned the vehicles.

The suspect, from Mambedi-Valdeizia, and who may not be named until he has pleaded, was remanded in custody after a brief appearance in the Vuwani Magistrate's Court.

He is facing a charge of possession of suspected stolen vehicles and will appear on Monday for a formal bail application.

A National Prosecuting Authority source told Sowetan that the trucks were suspected to have been stolen from Mpumalanga and were to be smuggled to Zimbabwe.

"The arrest was made after a sting operation was conducted following a tip-off from members of the community about a motor vehicle theft syndicate which is operating from various provinces," said Ngoepe.

In recent months, police have been struggling to contain a growing trend of cross-border car smuggling syndicates that target luxury vehicles, including 4x4s.