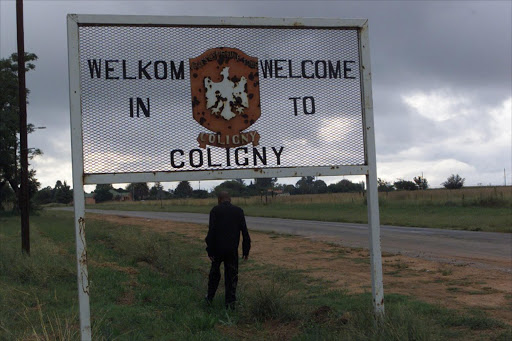 This is the Welcoming sign of Coligny in the North West province.
Image: Tiro Ramatlhatse

The legal representative of one of the North West farmers accused of killing a Coligny teenager on Thursday questioned the time frame of the boy’s death.

This was after the second witness‚ Warrant Officer Moremi Modisane‚ told the North West High Court that he had received a call from the local clinic that the boy‚ Matlhamola Jonas Mosweu‚ had died at approximately 11 am.

Modisane was called to explain what had happened on April 20 when the two accused‚ Pieter Doorewaard and Phillip Schutte‚ arrived at the police station to report the incident.

Advocate Pieter Smit‚ representing accused number two Schutte‚ asked how come he had called Schutte at approximately 11am when the clinic report stated that the teenager was only certified died at 11.39am.

“How can you phone accused number two at approximately 11 because the boy was not dead by then?” he asked.

Modisane said the two accused had reported that a boy had fallen off their bakkie while they were trying to drive him to the police station after allegedly catching him stealing sunflowers.

He said the two asked him to call the ambulance and directed him to the scene of the incident‚ saying they had other errands to attend to.

Modisane further told the court that when he arrived at the scene he found the child still breathing while lying down with his head facing down.

State prosecutor Rapula Molefe asked whether Schutte had tried to call back between the period of the incident and now‚ Modisane said Schutte did not call back.

Molefe told the court that he was trying to show that the two accused had failed to open a theft case in spite of the fact that they went to the police station.

He said the two did not care about Mosweu’s injuries as they rushed to the police station instead of calling an ambulance.

He said they did not show that they cared as they also refused to go back to the scene with the police officer.

Molefe said they had made things worse by cutting off Modisane’s call instead of responding to the report that Mosweu had died.

Matlhomola was killed on April 20 after the two accused him of stealing a sunflower head.