Woman has metal object in stomach 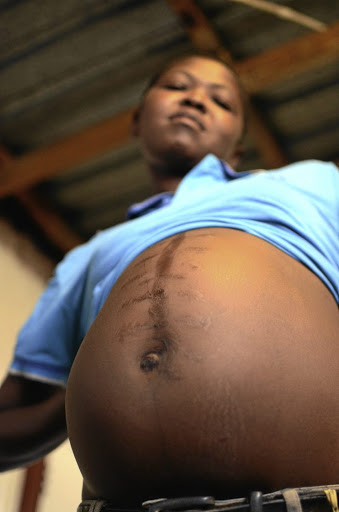 A young woman is living in shame as her bulging stomach keeps growing.

Onkabetse Seoposengwe. 28, from Motlhabeng village in Mahikeng, North West, said people in her neighbourhood call her the "permanently pregnant woman".

Her ordeal started in February 2015 when she noticed her stomach was growing big and painful.

At first she thought it was not something to worry about until the pain became constant.

In early 2016 it grew bigger and has kept on growing.

She now has to sit with her legs open to support her overgrown stomach.

She said she visited different clinics in Mahikeng and was referred to North West Provincial Hospital in March last year.

On arrival at the hospital, an X-ray was performed to determine the problem and it was found that there was an object inside her stomach.

The doctors asked her to come back for a surgery appointment. Seoposengwe said despite several trips to the hospital, from 2016 to last month, she was still not getting any help.

"I made so many trips to the hospital and was told to come at a certain date for appointment, but still they could not help me. Instead they gave me painkillers," she said.

Her mother Jocobina Tau said her daughter was suffering: "She cannot find a date for surgery. The hospital keeps on returning her back home for another date. We have lost hope."

Seoposengwe said all she wanted was to be normal.

"People call me names. Others who know I have been like this for a while gossip. I can't even go to town. This is embarrassing," she said.

North West department of health spokesman Tebogo Lekgethwane said: "We were not aware of the matter, but we will investigate it."