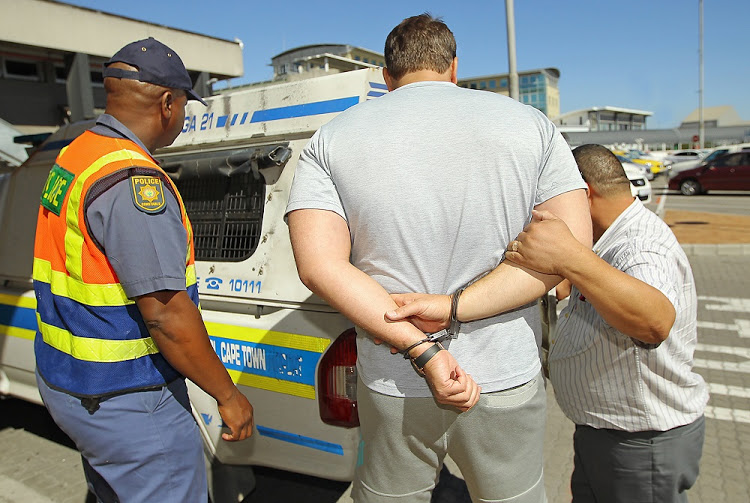 Alleged Cape Town mafioso Mark Lifman was arrested at the Cape Town International Airport on Wednesday on a charge of pointing a firearm and intimidation.

It is believed that the complaint was made by alleged racketeering syndicate boss Nafiz Modack‚ and relates to an incident in March last year.

The arrest is believed to be connected to the ongoing fight between two security groups fighting for control of Cape Town's nightclub industry. The one group is headed by Lifman and alleged Sexy Boys gang boss Jerome "Donkie" Booysen‚ and the second group by Modack and Booysen's brother‚ Colin.

Western Cape police spokesman Captain FC Van Wyk confirmed that an arrest was made‚ but did not mention Lifman by name. He said that the arrest took place shortly before 4pm.

"He was arrested on charges of alleged intimidation and pointing of a firearm relating to an incident in Parow in March 2017. He will appear in Parow Magistrates Court once charged‚" the statement said.

According to Lifman's lawyer William Booth‚ he was arrested by a contingent of about 20 police officers who accompanied a police captain at the airport. He had just arrived back‚ via OR Tambo International‚ from Europe.

Booth described the arrest as "illegal" and "absurd to the extreme" because it relates to a charge from March last year. He also claimed that the police captain handling the complaint went to do interviews with Modack in Pollsmoor prison‚ where he is currently being held.

"They've detained him‚” Booth said. “It's malicious‚ illegal‚ unfounded‚ and there is no basis for his arrest. I've phoned every high-ranking SAPS office in the Western Cape and no one is prepared to help.

"He has severe back pain. He's had a very recent back operation. Now he's stuck in a cell on a cold concrete floor.”

A Johannesburg man who pretended to be an employee of Johannesburg Water‚ has been arrested for allegedly scamming and soliciting bribes from ...
News
3 years ago

A 61-year-old Limpopo man has been arrested for allegedly raping an 11-year-old girl.
News
3 years ago

Seven suspects were arrested by police at the Kliptown Bagdad flea market for being in possession of suspected stolen property.
News
3 years ago
Next Article