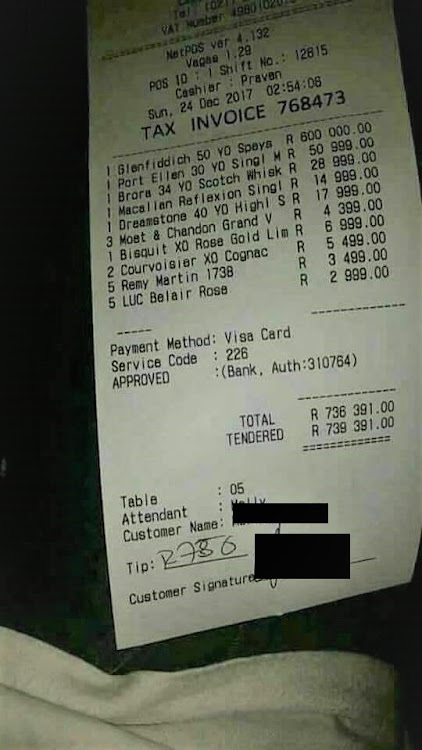 If you’ve been on social media over the past three days‚ you’ll have spotted a photo of a receipt for alcohol – including R600 000 for a bottle of Glenfiddich 50-year-old whiskey.

The total on the receipt‚ dated 24 December‚ reflects two other very expensive whiskeys – R50 999 for a Port Ellen 30-year-old single malt and R28 999 for a bottle of 34-year-old Brora – both of which are rare. Also purchased was Remy Martin and Moet champagne

Although this publication could not verify whether the receipt was legitimate, we tracked down the man whose name appears on the slip.

He did not wish to be named‚ the 28-year-old but confirmed the purchase and said the slip had been “accidentally leaked to social media”.

“I am based in Durban and am an underground binary trader invested in property in various cities around South Africa‚” the man said.

“That picture accidentally leaked to social media. I am not a show-off like other Forex or binary traders. Most of them think that they are rich or self-claimed millionaires but when it comes to reality‚ they got nothing‚” he said.

Asked whether the R600K bottle of Glenfiddich is worth the price tag‚ the man said he would know on New Year’s Eve.

“It’s still closed for 31 December‚” he said. “I bought that day because there are only a few bottles of it around SA.”

In October‚ this publication reported that the bottle of Glenfiddich had tongues wagging when it appeared alongside other six-figure whiskeys in the Makro Christmas catalogue.

Makro liquor director Jonathan Koff said at the time they had sold a number of pricey bottles this year‚ but not any of the Glenfiddich – until now.