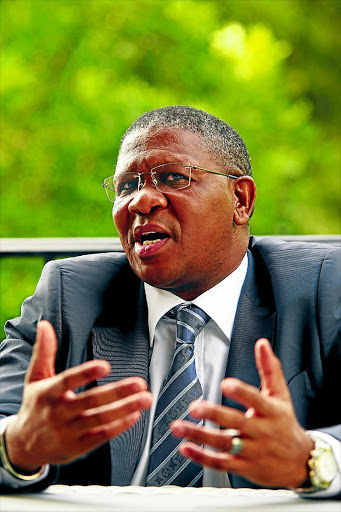 Police Minister Fikile Mbalula has taken a swipe at those who have questioned his activities in Dubai.

According to a location geotag shared through a tweet he posted several days ago‚ Mbalula is in Dubai for the festive season.

“Safa ngama Gupta, I pity those who have never been to Dubai hurry up guys the gates are closing the law is coming that debars u from visiting Dubai. Bcos it is allegedly owned by the Guptas‚” Mbalula tweeted.

Economic Freedom Fighters leader Julius Malema was among those who raised an eyebrow at Mbalula’s holiday.

“The minister of police out of the country at this critical period of the year‚ talk of priorities. Crime is a serious problem in this country but leisure for our ministers is more important according to the conduct of @MYANC Ministers‚ Sies‚” Malema tweeted.

Mbalula hit back: “Poor pathetic attempt to gather votes. The minister of police launched festive season operations early in November‚ has been operational since. The increased police visibility at malls isn’t happening by chance.”

@Julius_S_Malema it is leisure to b with family? Don't b desperate for votes you can do better don't doubt your support man.

The pair continued to exchange words on social media‚ with Malema saying he was not fishing for votes but calling for Mbalula to lead from the front.

Mbalula maintained that the country was in safe hands with a capable police commissioner at the helm.

I’m not asking for anything unreasonable, all we are asking for is for our minister to be home with us during this critical period of the year. All I get in response is insult from my minister @MbalulaFikile. Just come back home before we call for your resignation please...