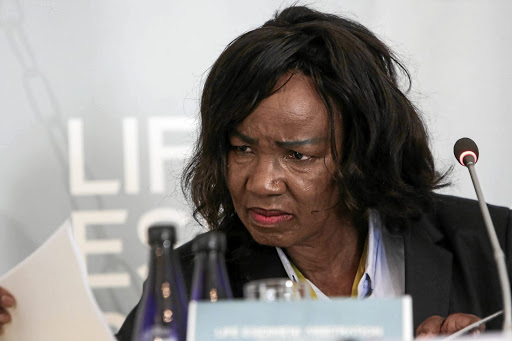 Suspended Gauteng department of health director Makgabo Manamela said her life could be in danger if she was accused of intentionally issuing licences to NGOs that were incapable of caring for mentally ill patients.

Manamela was giving evidence before arbitration hearings on her involvement in the transfer of mentally ill patients from the Life Esidimeni to different NGOs in Gauteng.

Five times Makgabo Manamela was schooled at the Esidimeni hearings

Makgabo Manamela was described in her four days on the stand by advocates as being "evasive".
News
4 years ago

Advocate Dirk Groenewald, who represents the victims' families, told Manamela she did not care about the patients who died in the NGOs.

"I put it to you that you didn't care what happened to the patients," Groenewald said.

Manamela said the questions she was asked were aimed at upsetting family members.

"My life and that of my family will be in danger," she said.

Groenewald told Manamela that she issued licences to NGOs that she knew were not eligible to care for mentally ill patients.

"At the time when I issued the licences I didn't know that they were not eligible. I issued them based on reports given to me," she said.

Manamela said she could have stopped the transfer if she could. "I did not have the powers to say, terminate. I was carrying out the instructions of my seniors."

Dr Makgabo Manamela‚ continued to say she was not responsible for the Esidimeni deaths.
News
4 years ago

She again claimed she was instructed by former Gauteng health MEC Qedani Mahlangu and head of department Levy Mosenogi.

Manamela told the tribunal that she felt she was being treated unfairly because she was not given an opportunity to explain her version of events leading up to the transfer of patients.

She said she regretted that the patients lost their lives.

"It was so painful for me to learn even of the first death ... I would appreciate if the families could find closure."

Manamela added that everyone, including the leadership of the department, should take responsibility for what happened. When Moseneke asked her if those responsible should be criminally charged, she said she was in no position to say anyone should be charged.

Moseneke to Manamela on Esidimeni: ‘You don't get it’

Justice Dikgang Moseneke spent Makgabo Manamela’s fourth day on the stand trying to get her to realise the fatal consequences of her actions‚ ...
News
4 years ago
Next Article