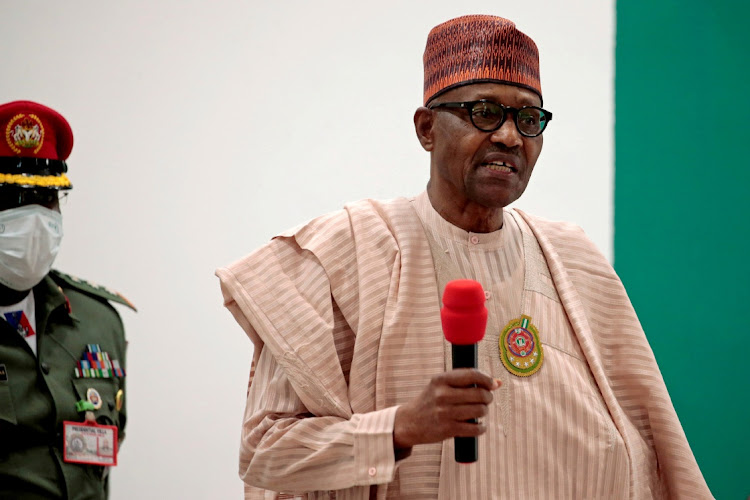 The statement issued by the office of President Muhammadu Buhari said "a rude shock" awaits "those bent on destroying the country through promoting insurrection, and burning down critical national assets".
Image: Afolabi Sotunde

People who promote insurrection in Nigeria face a "rude shock", its president warned on Tuesday, raising the possibility of a fierce crackdown on rising violence in the southeast that has included arson attacks on police station and electoral offices.

Security forces are already grappling with criminal gangs in the northwest who carry out mass kidnappings for ransom, a decade-old Islamist insurgency in the northeast, and piracy in the Gulf of Guinea off Nigeria's southern coast.

Electoral offices and police stations have been burned down in recent months across the southeast, a region where armed gangs have carried out a series of killings of police officers, prompting a police operation in May.

Nigerian authorities have blamed those attacks on a banned separatist group, the Indigenous People of Biafra (IPOB), and what police call its armed wing, the Eastern Security Network. But the IPOB has repeatedly denied involvement.

An armed gang abducted students from an Islamic school in the north-central Nigerian state of Niger on Sunday, police and state government officials ...
News
1 year ago

The statement issued by the office of President Muhammadu Buhari, who previously led Nigeria as a military ruler in the early 1980s, said "a rude shock" awaits "those bent on destroying the country through promoting insurrection, and burning down critical national assets".

It referred to the 1967-70 civil war fought over the secession of an area in Nigeria's far southeast called Biafra that killed one million people.

"Those of us in the fields for 30 months, who went through (that) war, will treat them in the language they understand. We are going to be very hard sooner than later," Buhari, who served in the army against the secessionists, was quoted as saying.

On Monday the streets of towns across the southeast were quiet and businesses were shuttered after the IPOB urged people to stay at home to commemorate those who died in the war.

The presidency statement said there had been 42 attacks on offices of the Independent National Electoral Commission in recent months across 14 states.

Nigerian authorities said on Tuesday that about 200 children had been seized in the latest school kidnapping in its violent north but they ruled out ...
News
1 year ago

Kidnappers have released the remaining 14 students who had been held captive after being abducted last month from a northern Nigerian university, a ...
News
1 year ago

More than 70 dead after boat sinks in Nigeria

Nigerian authorities have recovered the bodies of more than 70 people after an overloaded boat capsized in the northwestern state of Kebbi on ...
News
1 year ago
Next Article