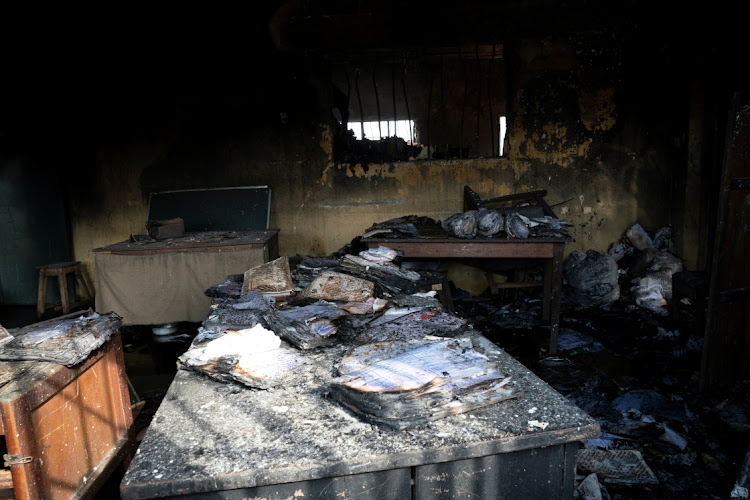 Burnt prison books are seen on a table after gunmen attacked and set the prison facility ablaze in Imo State, Nigeria on April 5, 2021.
Image: David Dosunmu

More than 1,800 inmates escaped from a Nigeria prison in the southeastern city of Owerri after an attack by gunmen carrying rocket-propelled grenades, machine guns, explosives and rifles, the prisons authority said.

Nigerian police said it believed a banned separatist group, the Indigenous People of Biafra (IPOB), was behind the attack, but a spokesman for the group denied involvement.

The secessionist movement in the southeast is one of several serious security challenges facing President Muhammadu Buhari, including a decade-long Islamist insurgency in the northeast, a spate of school kidnappings in the northwest and piracy in the Gulf of Guinea.

"The Owerri Custodial Centre in Imo state has been attacked by unknown gunmen and forcefully released a total of 1,844 inmates in custody," a Nigerian Correctional Service spokesman said in a statement late on Monday.

The attackers used explosives to blast the administrative block of the prison and entered the prison yard, police said in a separate statement.

Tensions have increased in the southeast in recent months in the wake of accusations that a paramilitary wing of IPOB, known as the Eastern Security Network, have been involved in clashes with the military.

"Preliminary investigations have revealed that the attackers... are members of the proscribed Indigenous People of Biafra (IPOB)," said Frank Mba, a spokesman for the Nigeria Police Force.

But a spokesman for IPOB told Reuters in a phone call that the group was not involved. He said a statement would be issued in due course.

Several police stations have been attacked in southeastern Nigeria since January, with large amounts of ammunition stolen. No groups have claimed responsibility for the attacks.

Islamist insurgency Boko Haram claimed the shooting down of a Nigerian Air Force fighter jet in a video seen by Reuters on Friday, two days after the ...
News
2 weeks ago

Armed men attempted to kidnap more students in Nigeria's Kaduna state overnight on Sunday, a state government official said, as 39 others from an ...
News
1 month ago

Gunmen in the northwest Nigerian state of Kaduna kidnapped around 30 students overnight from a forestry college near a military academy, the state's ...
News
1 month ago
Next Article