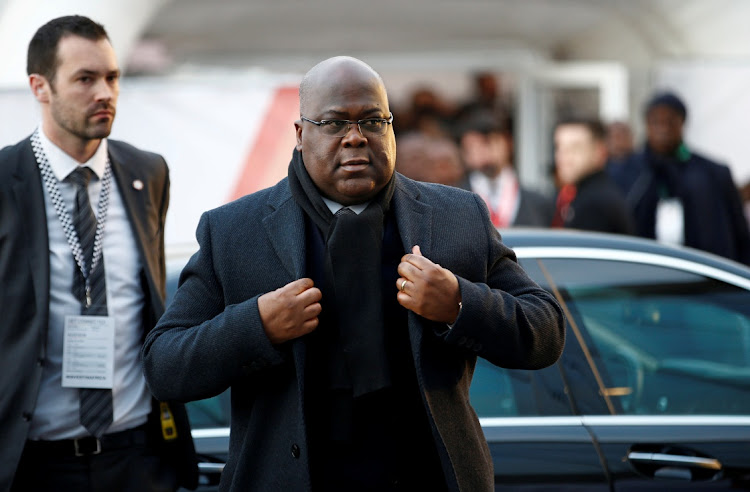 FILE PHOTO: Democratic Republic of Congo President Felix Tshisekedi said in a speech on Sunday that he would call for new parliamentary elections if he was not able to convince enough lawmakers to join his coalition.
Image: HENRY NICHOLLS

Allies of former Congolese leader Joseph Kabila on Monday rejected President Felix Tshisekedi's move to end his governing coalition with them, setting up a stark test of Tshisekedi's political strength and sparking clashes in the capital.

One day after announcing he planned to form a new majority coalition that would leave him free to sack his government, Tshisekedi asked for the resignation of Prime Minister Sylvestre Ilunga, who is a Kabila ally, a source at the presidency said.

"He's not going to resign. We know that," the source said, adding that Tshisekedi would have to force Ilunga out by other means.

Tshisekedi, a longtime opposition leader, agreed to the coalition after Democratic Republic of Congo's disputed 2018 election, in which Tshisekedi defeated the outgoing Kabila's chosen successor but Kabila allies won majorities in parliament.

Congolese MPs went on rampage, destroying desks and chairs after DRC President Tshisekedi announced Sunday that he might be forced to dissolve parliament. "The present majority has crumbled, and a new majority is required," he said.

The awkward partnership has been strained this year, leading to gridlock on Tshisekedi's priorities of addressing endemic insecurity in the country's mineral-rich east and reforming the judiciary.

Tshisekedi said in a speech on Sunday that he would call for new parliamentary elections if he was not able to convince enough lawmakers to join his coalition.

Kabila's Common Front for Congo (FCC) alliance responded on Monday, with its representative Nehemie Mwilanya telling reporters that Tshisekedi's actions "violate the constitution and serve as a pretext to liquidate the institutions established by the elections".

Police used tear gas to break up fights between rival groups of supporters gathered outside parliament, while inside, pro-Tshisekedi lawmakers turned over furniture to protest against the assembly's pro-Kabila leadership.

There was no immediate comment from the authorities on possible casualties.

Kabila, who served 18 years as president, has maintained extensive influence across state institutions ahead of a possible candidacy in the 2023 election.

But Tshisekedi has made progress chipping away at that, including by forcing through the nominations of three new judges to the nation's top court over the objections of the FCC.