University students stage protest to 'congratulate, my rapist for graduating' 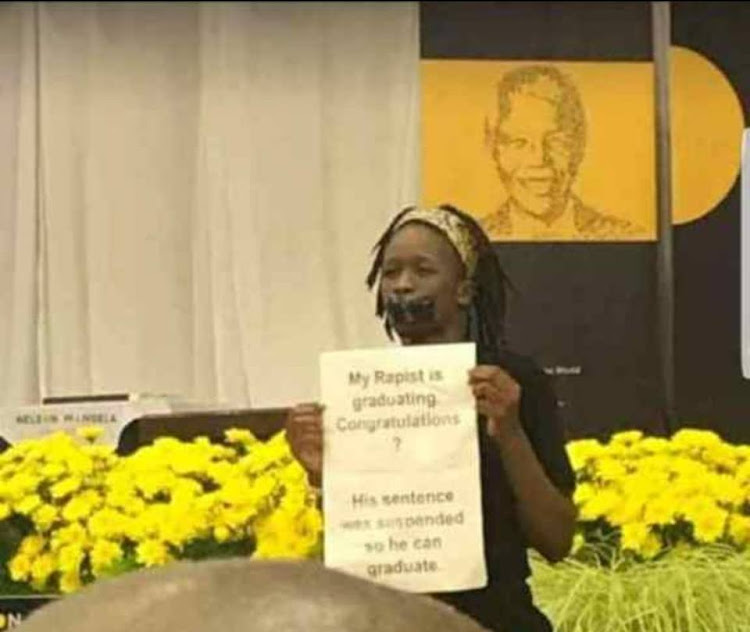 Students held a silent protest over the graduation of an alleged rapist at Nelson Mandela University on Friday. The students say 10 cases of sexual offences had been reported on the campus so far this year but none had been properly investigated.
Image: Twitter/@NandiphaMagaqa

A group of Nelson Mandela University students staged a silent protest at the university’s graduation ceremony on the South Campus on Friday - over an alleged rapist graduating.

Wearing black and holding placards, saying "Congratulations, my rapist is graduating", the small group of students stood up during the first graduation ceremony of the day.

In a letter sent to the university on Wednesday, the group - calling themselves Activist ConneXtions - wrote that 10 cases of sexual harassment and sexual assault had been reported on the campus since the beginning of 2019.

They wrote: "To date, these cases have not been investigated and no dockets have been opened at [the university’s] legal services. Applications for no-contact orders and summary suspensions have been stalled at legal and protection services, forcing victims to share the same space as their abusers on a daily basis.

"Activist ConneXctions can also  confirm  that it received news of the graduation of convicted rapist [from 2018] during the autumn graduation taking place between April 5 and 13 2019.

Silent demonstration held by students during graduation at NMU to highlight their concerns & pain over what they have called a rape culture. Some of the cards read “congratulations?my rapist will graduate because his case was suspended”, “rapists graduate at NmU” #SABCNews pic.twitter.com/IzVgL3Kd5G

"This is an indication of the failure of the university to do what is reasonably expected of them as per the sexual harassment and sexual offences policy (2017).

"The graduation of students who have been found guilty of rape and other sexual offences is a direct result of the failure of the university disciplinary process.

"Students who are currently facing disciplinary processes for sexual offences should not be at graduation or participate in any university activities until such a time that their case is completed.

"What is even more offensive is the celebration of convicted students at the 2019 autumn graduation, as if their crimes are not real.

"Activist ConneXions will protest autumn graduation and call on the university to meet the following demands:

"If the university fails to act on this statement, we will interpret it as a signal of their allegiance with perpetrators over victims/survivors.

"The battle lines have been drawn between patriarchy and an equity-based reality. We can only wish that the university will choose the latter," the letter read.

Chancellor Geraldine Fraser-Moleketi @GJFras says that they have noted the silent protest and message by students at the graduation ceremony (referencing GBV) and has committed to following up.

One of the Activist ConneXtion co-ordinators, Nangamso Nxumalo, 23, confirmed that the group had sent the letter on Wednesday, adding that a statement the group was preparing would be sent out later on Friday.

NMU spokesperson Zandile Mbabela said: "There was a silent protest by about four students who held up placards in front of the stage. Chancellor Dr Geraldine Fraser-Moleketi acknowledged the action and committed to follow up."

Mbabela could not immediately comment on the contents of Wednesday's letter.