'I was raped by other men, and I now have HIV' - Siyabonga Makhonxa 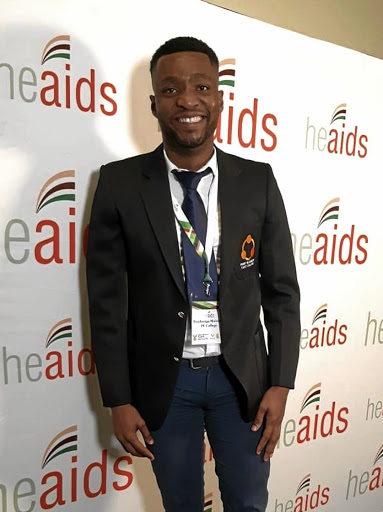 Siyabonga Makhonxa says he found solace in speaking about his ordeal.
Image: Supplied

Siyabonga Makhonxa was 17 years old when he was raped by unknown men on his way home from a party.

"The year 2007 was a horrible year for me, I used to ask God [to take me]. I went to a Freshers Ball at Fort Hare University with my friends. We had lots of alcohol to drink and unfortunately I lost them (friends) along the way.

"My home was 50km [away] and there was no transport as it was at night. While walking, a [VW] City Golf with five male occupants stopped and offered me a lift," Makhonxa said.

He said on the way the car had a tyre puncture and as they were standing outside waiting for one of the men to change the tyre, something hit him on the back of his head.

"I passed out, and when I regained consciousness a couple of hours later, I was half-naked and my lower body was sore.

"When I looked down I had blood ... by then I never knew men could sleep with other men. I was found by some man who was passing by and he rushed me to hospital where the doctor confirmed that I was raped.

"The sad part is, I don't know whether I was raped by one man or all of them," Makhonxa said.

Yesterday's discussions at the breakfast were centred around the safety and wellness of students and youth, with a focus on gender-based violence prevention.

"The epidemic in South Africa of gender-based violence indeed mirrors what we see in different parts of the world," Mlambo-Ngcuka said.
News
3 years ago

"The link between gender-based violence (GBV) and alcohol abuse is extremely close. We need to give attention to the abuse of alcohol and its links to violence. The impact of GBV in particular is a problem that we need to face head-on as a society," Pandor said.

Executive director of UN Women Phumzile Mlambo-Ngcuka asked Pandor to embark on a study on the rising prevalence of GBV in South Africa.

Makhonxa, who is an HEaids peer educator, said he found solace in speaking about his ordeal.

A couple of months after the incident, Makhonxa said he was diagnosed with HIV/Aids.

"It's not easy being raped, especially as a male, however I am still standing. I am the voice to tell others out there that it is not the end of the world.

"Have a positive attitude and just take your treatment," he said to loud applause.

He said becoming a peer educator helped him heal, gain courage and empower others.