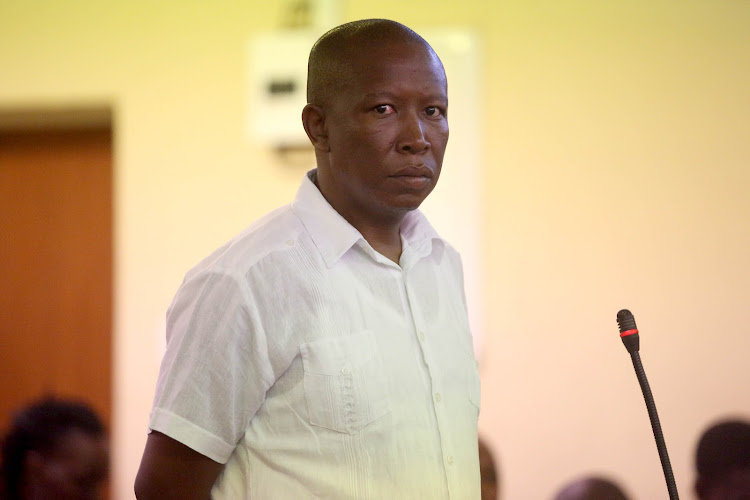 The case against EFF leader Julius Malema has once again stalled because of his legal challenge of the law.

Malema made a brief appearance at the Newcastle Magistrate's Court on Monday where state prosecutor Jabulani Mlotshwa told the court that the matter could not continue until the finalisation of Malema's challenge of the Riotous Assembly act.

Malema filed an application to the Pretoria High Court in December challenging the constitutionality of the laws used to charge him.

Judgment was reserved on the matter.

Mlotshwa said that there was no indication of when the Pretoria matter would be finalised but hoped it would be some time before March.

Malema faces separate charges under the 1956 Riotous Assemblies Act and the Trespass Act for inciting people to occupy any vacant land that they find. The charges stem from two incidents in 2014 and 2017.

In 2014 he told the EFF’s elective conference in Bloemfontein: "We’re going to occupy the unoccupied land because we need land. For us to eat‚ we must have the land. For us to work‚ we must have the land. I come from Seshego – if there is unoccupied land‚ we will go and occupy the land with my branch. You must go and do the same in the branch where you come from."

In June 2017‚ Malema told supporters in the northern KwaZulu-Natal town of Newcastle that white people could not claim ownership of land because it belonged to the country’s black African majority.

The matter will be back in court on July 8.

After his appearance, Malema strode out of court confidently to address about a thousand supporters who had each received EFF t-shirts.

EFF leader Julius Malema is expected to appear in the Newcastle Magistrate's Court on Monday for his comments to supporters to invade vacant land.
News
2 years ago
Next Article