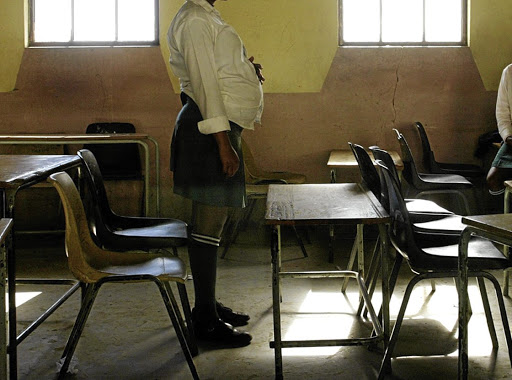 It was reported in June that a Grade 5 pupil was among 1 000 schoolgirls who fell pregnant in Ekurhuleni in 2017.
Image: ESA ALEXANDER

Limpopo’s education department says it is concerning that 27 learners have been confirmed to be pregnant at one secondary school near Polokwane.

Fourteen of the pregnant learners at Molautsi Secondary School at Blood River are in Grade 12.

Department spokesman Sam Makondo said the high rate of pregnancies was worrying. “It says to us that we should‚ all of us as various stakeholders in education‚ take a collective responsibility to raise more awareness inside and outside our schools to prevent more learners from this situation‚” he said.

“We think together we can make the necessary impact and our learners will be able to stay in school‚ focusing on their education and nothing else‚” he added.

In an interview with the South African Broadcasting Corporation (SABC)‚ one of the pregnant pupils‚ who spoke on a condition of anonymity‚ said she was aware of the consequences of unprotected sex. She asserted that falling pregnant had not affected her studies.

“I have passed my mid-year exams …. I was taught about issues of (sex) education at school. I knew everything - I just decided not to prevent. My mom took me to the clinic to prevent and then I decided to do it my own way‚” she said.

The school’s deputy principal‚ Joseph Phaleng‚ said a lack of parental guidance and substance abuse contributed to the rate of teen pregnancy.

It was reported in June that a Grade 5 pupil was among 1 000 schoolgirls who fell pregnant in Ekurhuleni in 2017.

A Grade 5 pupil was among the 1000 schoolgirls who fell pregnant in Ekurhuleni last year.
News
4 years ago
Next Article