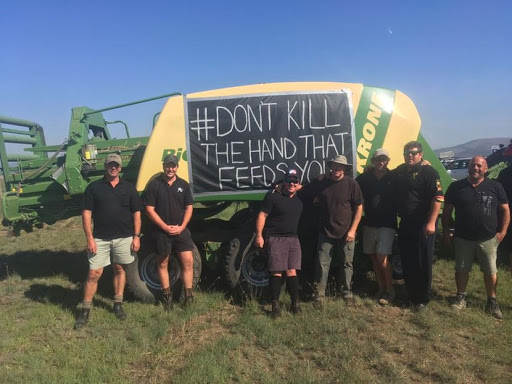 The African National Congress (ANC) has condemned the display of the apartheid South African flag during nationwide protests against farm murders on Monday.

“The racial characterisation of crime and the stoking of racial hatred by some elements in the campaign through‚ amongst others‚ the arrogant and offensive display of apartheid South Africa’s flag‚ are indicative of an unrelenting yearning for apartheid fascism and white supremacy and make a mockery of the national reconciliation project; continuing to entrench obstacles to the creation of a non-racial society in South Africa‚” the party said in a statement.

Thousands of people across the country took to the streets on Monday to take part in what civic group Afriforum described as the biggest protest ever against farm murders.

The protest‚ dubbed #BlackMonday‚ was initially sparked by a video by Chris Loubser‚ a farm manager from Franschhoek in the Western Cape‚ whose friend had been killed.

Since January‚ at least 341 farm attacks have already been carried out‚ in which 70 people have been murdered‚ according to Afriforum.

The ANC has called on the farming community to appreciate the importance of all lives.

“It was during the apartheid era‚ which some today clearly still long for‚ where government sought to protect only the privileged white minority at the expense of the suffering black majority.

“South Africa is littered with tragic reports of inhumane practices by some farmers against their workers and brutal killings of black people on farms explained through ludicrous statements such as that they were ‘mistaken for baboons’ and other callous justifications‚” the party said.

“The ANC invites the proponents of #BlackMonday to join‚ rather than alienate‚ the majority of South Africans in the fight against all forms of crime against all people in our country.”