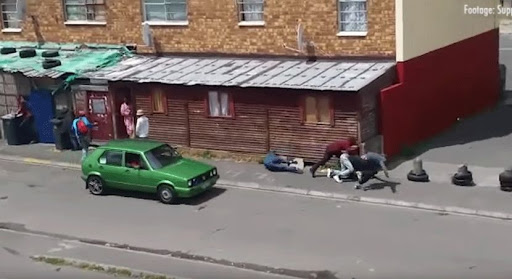 On Thursday two videos of an apparent drive-by shooting surfaced on Facebook.

In the first video‚ the occupants of a green Golf open fire on a group of four men. One of them falls to the ground while the others run away. A gunman then takes aim at the car.

In the second video of the same incident‚ the gunman fires at another man in the street. A small child then calmly wanders into the street to watch the commotion.

The publication has established that the videos were filmed in Leonsdale‚ Elsies River‚ and not Kraaifontein‚ as claimed on social media posts. However‚ police spokesman Lieutenant Colonel Andrè Traut‚ said: “This office has no record of a shooting incident in Elsies River yesterday.”

Traut explained that there had been another shooting incident that occurred in Scottsdene — a neighbourhood in Kraaifontein — on Thursday. He said a 25-year-old man was killed on Thursday in Scottsdene and three males aged 17 were shot and wounded. Photographs of the dead man and the injured youths were shared on Facebook and circulated on WhatsApp. The man’s eyes are open and he is lying in pool of blood.

“Our detectives are hard at work to get to the bottom of yesterday’s incident and adequate resources have been deployed in the Kraaifontein area to ensure the safety of the community and to quell any form of violence‚” Traut said.

Chairman of the Kraaifontein Community Policing Forum‚ Mawethu Sila‚ said he was disturbed by the images circulating in various communities.

He said Scottsdene residents were already traumatised by gang violence in the area.

Sila said it was irresponsible to post photographs of people before their families were informed about their death.

“People are putting this on social media without checking with the families [of the victims]…They should refrain from doing this‚’’ Sila said.

On Tuesday he joined the local councillor on a walkabout in the area to discuss residents’ concerns.

“Shootings are gang-related. But gang fights are very‚ very dangerous and difficult to curb.’’

But Elsies River community worker Imraahn Mukaddam was not concerned that the videos of the shooting in his area were being widely distributed.

People have the notion that gang violence is something that happens far way but the reality is that this is a war zone. We are witnessing this on a daily basis‚’’ Mukaddam said.