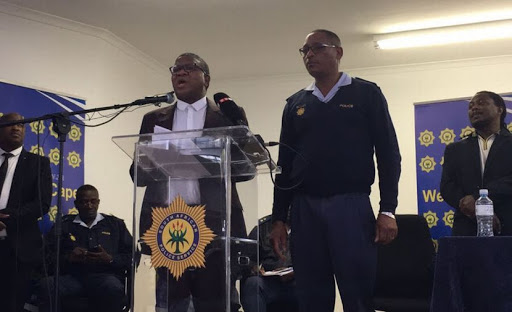 Fikile Mbalula presented Colonel Bongani Mtakati to the crowd in Philippi East after the recent murders in Marikana saying "I have faith in this man‚ they call him a wizard. He is up to the task at hand.” Image: Anthony Molyneaux

The violence resulted in the massacre of 11 people on Friday. Several suspected criminals also reportedly died at the hands of vigilantes over the past month.

In an address on Tuesday peppered with expletives‚ Mbalula told petrified Marikana residents he had overhauled management at Philippi East police station. Presenting Colonel Bongani Mtakati to the crowd‚ he vowed to end the crime.

“Things are going to change here‚ we have brought a new station commander‚” Mbalula said in isiXhosa‚ to loud applause. “I have faith in this man‚ they call him a wizard. He is up to the task at hand.”

IN HIS OWN WORDS: Fikile Mbalula calls out wanted suspects by name

Turning to Mtakati‚ he said: “Here are our people’s tears. You will not work alone.”

Mbalula urged residents not to take the law into their own hands. He vowed to deal with crooked police officers in the same way he would deal with criminals terrorising residents.

“I know it is difficult for you because sometimes you think you are reporting crime to a police officer and it turns out the person behind the counter at the police station is another criminal‚” said Mbalula.

“After reporting the crime the criminal turns around and uses a cheap cellphone to inform the criminals that ‘we are coming’. We will arrest those tsotsis‚ including those inside the police station until they sh*t themselves. They won’t escape. I have met with the police‚ I don’t work with the backstabbers.”

Mbalula apologised to a pastor who was present in the school hall for his foul language. But then he carried on.

“I brought my boys from Gauteng‚” he said. “Those boys who were shooting people here will fill the place with poo … they should know wherever they are – street by street‚ corner by corner — I am on to them.”

He said he had been told about notorious twins who were causing residents sleepless nights‚ but one them had been arrested and police were on to other one. Mbalula said police would turn Marikana upside down this week and root out the crime.