Baby bubbly after operation to put brain in skull 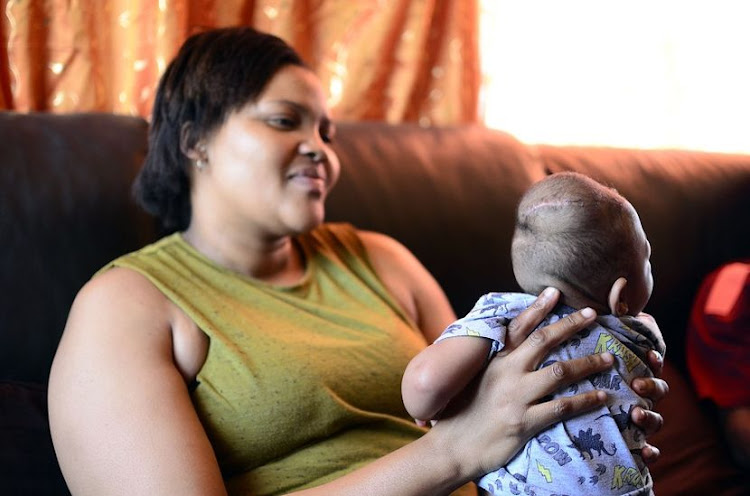 Baitshepi Leselo with her son Goitsemodimo Leselo at their home in Vryburg, after going a through a successful operation that doctors declared impossible. Photo: Tiro Ramatlhatse

A baby who was born with his brain out of his skull has been given a new lease of life after undergoing an operation.

Goitsemodimo Leselo was born at Joe Morolong Hospital in Vryburg, North West, on May 15 with his brain outside of his skull, a condition known as encephalocele.

Sowetan reported on his mother Baitshepi Leselo's desperation in June after doctors told her there was no hope for her son and she should take him home "to die".

A district health official told the baby's parents it "was impossible for the baby to live for two weeks".

This prompted Health Minister Aaron Motsoaledi to intervene, and a neurosurgeon from India who works for the department performed the operation.

Yesterday, Leselo said she was contacted by officials from the health department who offered to help.

"I gave him the name Goitsemodimo (God knows) because I knew that only God can heal him. I prayed every day and knew God will come through for him."

When Sowetan first visited the family in June, the baby was motionless. Yesterday, the four-month-old was bubbly.

He played with his hands, reacted to sound and smiled at his mother and father Eric.

He looked healthy and is due for a check-up tomorrow.

"Hospital staff took us to Klerksdorp in an ambulance so that our baby could be operated [on]," Leselo said.

"I heard them say 'this is Minister Aaron Motsoaledi's baby, stop everything and attend to him'. I was happy that my son was getting attention, but wondered why the minister had to know about the problem before they ga ve us five-star treatment."

Leselo said she was happy her son was now healthy.

Provincial health spokesman Tebogo Lekgethwane said the initial prognosis was that the operation was too risky and had the potential to kill the baby. "It is the surgeon who operated on the patient who took the risk. It is the skill of the surgeon that led to the success of the operation. The department recruited this surgeon from India ..."

Motsoaledi's spokesman Joe Maila said the minister was pleased the operation was successful. "When we receive a concern from patients we first assess if there is capacity at the local hospital before the matter is escalated further. In this instance, it was established that there is capacity and the specialist, after re-assessment of the patient, booked the baby [patient] in for an operation."