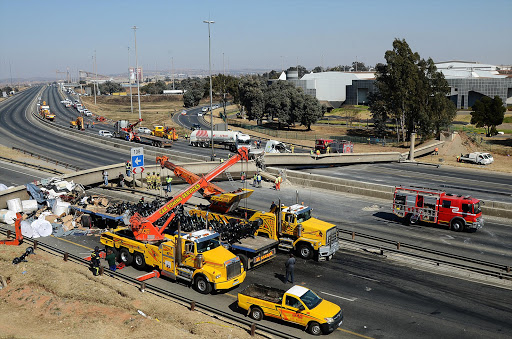 One of the survivors of yesterday's bridge collapse on the N3 Freeway that left five people injured has told how he thought he was going to die.

Fredson Chinkono, 36, who was travelling on the N3 from Vereeniging to Emalahleni (Witbank), said he only realised that a concrete slab had blocked the road when he was a few metres away from it.

"All I could say was, 'God, please help me'. I thought my life would end today. There was nothing I could do to stop the truck. I just went straight [in]to the concrete," he said.

Chinkono, a Malawian who lives in Tsakane, Ekurhuleni, was thrown through the windscreen and landed on the massive slab. He lost consciousness and woke up at the Hillbrow Clinic where he was discharged in the afternoon.

"I did not see myself fall. I was surprised when I woke up at the clinic. My body is painful, especially my right side. I only realised when I saw the pictures that I was fortunate to have survived."

Chinkono's uncle Kevius said he was shocked when told of the incident. He immediately called to find out how Chinkono was doing.

"I was relieved to know that he could still talk and hear [me]. However, he was badly injured," he said.

"He said he tried to press the brakes but the truck failed to stop immediately. As a result, it hit the bridge."

Security guard Matthew Nel, who lives near the N3, told government officials that he suspected illegal mining activities in the Bedfordview vicinity could have caused the collapse.

Nel said before the bridge collapsed he heard a big explosion followed by a tremor that lasted for about 10 seconds.

"My two dogs also barked non-stop after the earth movement. Every now and then when the zama zamas go down to do their illegal mining we always hear loud explosions. But I have never heard anything like that before; this was huge," he said.

Gauteng MEC for transport Ismail Vadi said the cause of the collapse is not yet known.

"All the injured people were taken to hospital and we are happy nobody died. Police and Sanral (SA National Roads Agency Limited) will carry their own investigations to determine the cause of the accident," he said.

Vadi said the bridge, which was built in 1970, had not been used for years.