'Lerato was killed by people she knew, it was a hate crime' 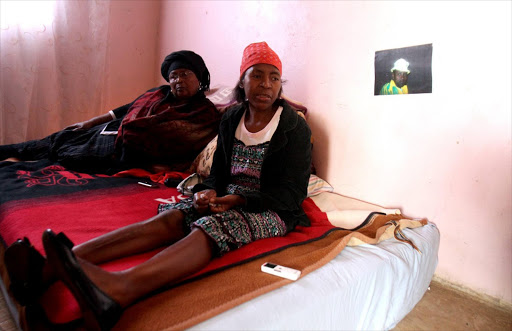 Zodwa Moloi, right, the mother of Lerato Moloi - who was found murdered at the weekend, is supported by Thandi Mathanjana at her home in Protea, Soweto. Picture Credit: Sandile Ndlovu

The woman whose half-naked body was found in an open veld in Soweto was allegedly killed by her friends.

Lerato Moloi's body was found at an open field in Naledi on Sunday. Lerato was among the four women whose bodies were found in the township over the weekend. Their gruesome killings have sparked nationwide outrage .

Community safety patroller Thabo Motloung told Sowetan that Lerato, a lesbian, was allegedly killed by her drinking buddies. He said Lerato was with the two men at a tavern on Saturday night.

"They were her friends. She hung out with them every weekend.

"I saw them with her at about 1am on Saturday. They had an argument over R20 at the tavern," he said.

Motloung said when he learned that Lerato was killed he hunted down the men together with other community members.

"They were the last people seen with her so we knew it was them. A video footage at the tavern also showed them with her. We found one of them at a shack and handed him over to the police where he revealed his accomplice," he said.

Lerato's grieving stepfather Thami Khumalo, 54, said: "Someone came here on Sunday morning and took me to the scene. Her body was laying there with two big rocks on her head and upper body. I could tell that the jacket belonged to her but I could not see her face until the forensic team removed the big rock.

"The level of brutality was shocking. I can't stop thinking about her." Lerato's devastated mother, Zodwa Moloi, said Lerato was her only child.

"I last saw her alive on Saturday night when she came to fetch a jacket. She said she would be back," Zodwa said.

She said she would miss her daughter's bubbly personality.

"People nicknamed her 'Tambai'. She was talkative and very friendly. My heart is broken."

Zodwa said her daughter was a temporary worker at BiG, a stationery company.

"She was killed by people she knew and trusted. We believe it was a hate crime motivated by her sexual orientation... most important, she was a woman killed by men," she said.

Motsoeneng was among dozens of women who gathered at the court to condemn the spate of attacks on women.