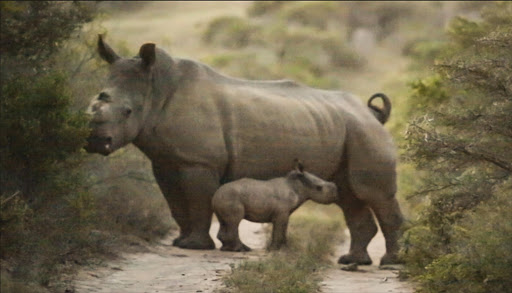 Thandi and her calf Picture: Supplied

Almost R400 000 has been raised in less than 24 hours for a KwaZulu-Natal rhino orphanage after a brutal attack in which a woman was sexually assaulted and two rhino died.

A heavily armed gang hit the Findimvelo Thula Thula Rhino Orphanage – at the Thula Thula reserve in northern KwaZulu-Natal – on Monday night‚ tying up staff and killing the two rhino as they watched in horror.

In the process‚ a woman was sexually assaulted and other rhino caregivers beaten. They are receiving medical and psychological care.

The attack prompted Thula Thula volunteer Megan Richards to set up a fundraising initiative on Wednesday on crowdfunding platform Generosity‚ with an initial goal of raising money for additional security at the orphanage for four months.

In her motivation Richards said: “The orphanage was attacked by armed poachers‚ the staff were assaulted and two rhinos were poached (one of the rhinos did not die immediately and had to be euthanased the following morning).

“This can’t keep on happening. We need to act now. We need to support this orphanage and their amazing work at their time of need. If we raise $55 000 (R718 520) we can secure the work for a year and keep the remaining rhino calves safe from poachers’ attacks.

“As someone who has worked at Thula Thula Rhino Orphanage and knows how gentle‚ amazing and trusting the rhinos are this news has come as a living nightmare. Please help to keep the reserve protected and the surviving rhinos safe.”

In an update‚ Richards said: “You have restored my faith in humanity with your support. At this rate we can help fund long-term protection. One year of complete protection would cost approx. $55 000.

“The initial goal of $6 300 was to provide additional security for four months; keep on sharing as the more money we raise the better security we can provide and the longer we can provide it! “