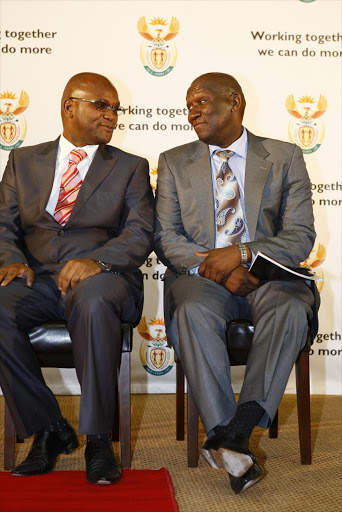 The ANC's national executive committee (NEC) meeting got so heated that members of the executive almost exchanged blows.

Sowetan understands that Bheki Cele, who is a Deputy Minister of Agriculture, apparently annoyed Nathi Mthethwa, who is the Minister of Arts and Culture, when he pointed out that the Marikana tragedy happened under his watch in August 2012.

At the time Mthethwa was the minister of police and Cele had just been fired as national police commissioner.

Cele was demonstrating to the meeting that the ANC was in trouble because leaders never take responsibility when they fail at their jobs. Sources at the meeting claimed that Cele's comments angered Mthethwa who in return howled at Cele, who responded saying "are you threatening me?"

It was a tense moment in the three-day long NEC meeting where some ministers shocked Zuma supporters by calling for his removal from the Union Buildings.

Several ministers, including Aaron Motsoaledi, Derek Hanekom and Thulas Nxesi faced their boss, supporting the call that he be recalled. It is unclear if their move will lead to Zuma dismissing them from his cabinet.

Yesterday, Zuma left the NEC meeting, while it was still discussing his fate, to meet his Ugandan counterpart Yoweri Museveni.

Those in support of Zuma called on the president to fire ministers that have called on him to step down, saying there was a clear break down of trust.

ANC chairman in the Free State Ace Magashule spoke against the recall and called on Zuma to fire the ministers that supported it.

Gauteng chairman Paul Mashatile, who stood to support the Zuma recall, was attacked by MK Military Veterans' Association president Kebby Maphatsoe, who told him that members in the branches did not support the recall.

Maphatsoe was referring to NEC meetings where they met with ANC members around the country soon after the party's poor performance during local government elections.

In big regions such as City of Johannesburg and Ek urhuleni members blamed Zuma for poor performance and also called for him to step down .

State Security Minister David Mahlobo stood up in support of Zuma, but NEC members shouted him down when he claimed he had been a member of ANC for 30 years.

Member of parliament Mathole Motshekga, who previously defended Zuma on the Nkandla report, supported a secret ballot on the Zuma's recall. International Relations Minister Nkoana Maite-Mashabane begged for unity, saying the debate would destroy the ANC.

Meanwhile, Pule Mabe said if the secret vote went ahead, then secretary-general Gwede Mantashe and ANC chief whip Jackson Mthembu should also be on the ballot for removal.

Sowetan understands that some NEC members put a proposal that officials should discus Zuma's recall further and report back to the committee. The party will hold a press conference today to communicate its decision

Political analyst at the University of Cape Town Zwelethu Jolobe said the move by some in the ANC to call for Zuma's head showed that they no longer trusted him.

"This shows that the ANC operates under the principle of collective leadership.

"Whenever there are challenges, the most important accountable body is the NEC. So now the NEC is showing that the party president is indeed accountable to the NEC," Jolobe said.