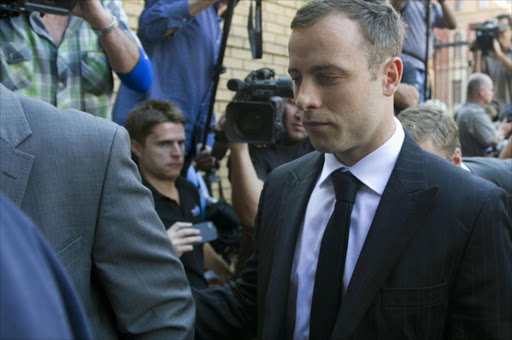 Oscar Pistorius arrives at the Pretoria High Court on September 11, 2014, in Pretoria, South Africa. Oscar Pistorius, stands accused of the murder of his girlfriend, Reeva Steenkamp, on February 14, 2013. This is Pistorius' official trial, the result of which will determine the paralympian athlete's fate. Judge Masipa has began delivering her verdict. Gallo images

The Department of Correctional Services has denied that Oscar Pistorius is on suicide watch.

This following a report by the City Press on Sunday that he was and that he had laid a complaint of attempted murder with prison authorities against nurses who he believes are trying to kill him.

“As Correctional Services we wish to reject allegations that Oscar Pistorius is on suicide watch. As communicated previously‚ there is an internal investigation which will finalise its work soon‚ while the allegations made by Oscar were reported to the police who will handle them accordingly.

“Further engagement would only be entertained on the matter when the investigation is completed‚” department spokesperson Manelisi Wolela said.

The City Press reported that three senior prison officials had confirmed that Pistorius’ complaint was laid three weeks ago.

Pistorius allegedly said that three prison nurses at Kgosi Mampuru II Prison‚ in Pretoria‚ were trying to kill him with “toxic” medication‚ according to the report.

Pistorius was apparently placed on suicide watch this week‚ the report said‚ after sustaining injuries to his wrists in prison.

Earlier this week Wolela could not give details of Pistorius’ injuries.

“The Kgosi Mampuru Correctional Centre attended to his minor injuries on his wrists but further sent him to Kalafong hospital for treatment and he was returned to the centre.

“Oscar Pistorius denied speculations of a suicide attempt. As a policy we cannot further discuss a particular offender’s personal condition in the public domain‚” said Wolela.