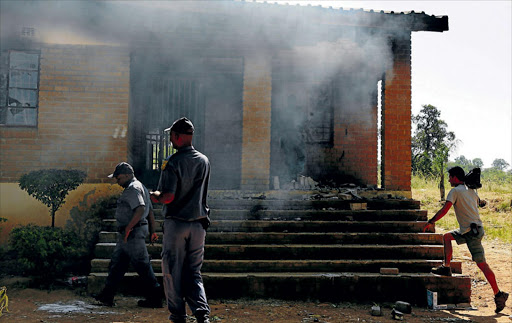 Police conducting a forensic investigation at Maligana Wilson Secondary School which was burnt by protestors in Mashau. Photo: SANDILE NDLOVU

The Vuwani protests in Limpopo have deepened the historical tribal tension between the Venda and Tsonga groups in the area.

On Friday, Sowetan spoke to residents on both sides of the divide who expressed their misgivings about each other's group.

The residents of predominantly Tsonga-speaking Bungeni, one of more than 10 villages in Vuwani, barricaded the road and entrance to their village, saying protesters from mostly Tshivenda-speaking villages wanted to burn down their schools.

Vuwani is situated between the towns of Giyani and Thohoyandou, both cultural centres for Tsongas and Vendas respectively.

Last year, residents of Malamulele, another significant town in this rural expanse, embarked on a six-week protest demanding a separate municipality from Thulamela local municipality, complaining about "Venda-dominated" Thulamela sidelining them in the delivery of basic services.

Schools in the area were burnt down during the protests.

The impasse ended with the announcement that Malamulele would be part of a new municipality that would include Vuwani. Residents of Vuwani, which is currently under Makhado municipality, protested against the decision, saying they cannot be governed by Tsongas.

"Last year when those people (Tsongas) were protesting they made it very clear that they do not want to be associated with us (Vendas). So why should the government force us to form a municipality with people who do not want us," said HaMashau resident Mashudu Lebago, whose village lies next to Bungeni.

About protecting their schools against possible arson attacks by Vuwani people, Matimba Chauke of Bungeni said: "It's not like we want to fight with the Venda-speaking people. But we will not allow them to burn down schools as we value education, hence we are blocking them from entering our village."

"As communities, whether Venda or Tsonga-speaking, we are one... because we live side by side," she said. The chief is a former ANC MP.

'Protest is making life hell for us pupils'

Grade 12 pupil Portia Mulatedzi from strife-torn Vuwani says not only are they unable to go to school because it has been burned down, but she is also being disturbed by noisy protesters when she tries to study at home.

Mulatedzi is one of more than 5000 pupils who have been languishing at home for more than a week after protesters set alight more than 20 schools in the area.

"In the next few months I will be starting with my trial exams and at the moment I do not know if we are going to attend classes this year. I know our parents are fighting for their rights but burning down schools is a violation of our rights as children," said Mulatedzi, a pupil at Vhafamadi Secondary in HaMashau village.

"To make matters worse, we cannot study at home due to the noise made by the protesters. This protest is making life difficult for us as pupils," said Mulatedzi.

Vuwani schoolchildren who happen to attend school outside the area have also been unable to go to school because the roads have been blockaded by protesters.

"I have not been to school since last week as all the roads have been barricaded and public transport is not operating. I just wish this protest can come to an end as I want to go back to school," said Mpho Mudau, of Elim High, outside Vuwani.

He added that he was losing precious time to study "because of something which I have nothing to do with".

The Congress of SA Students (Cosas) said security should be provided at schools as was the case when university students protested.

"When universities were burning down, we saw millions being spent to ensure there was private security to protect them. If we think education is the apex priority of government, the same must be done to protect basic education," said Cosas general secretary Khulekani Skosana.

The provincial education department said it was drafting a plan for the learners.

"We will draft plans on the way forward for our pupils as it will take months to repair burnt schools," spokesman Naledzani Rasila said.