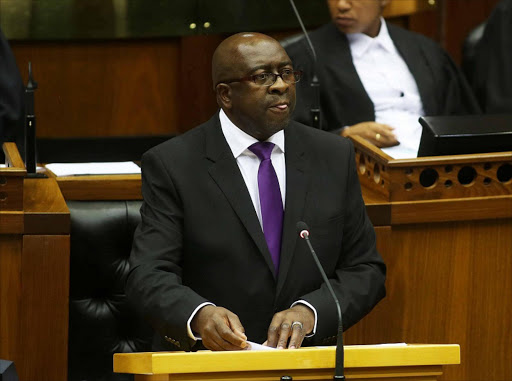 Minister of Finance Nhlanhla Nene during his first ever Medium Term Budget Policy Statement inside the National Assembly. Picture Credit: The Times

The Democratic Alliance is to ask that finance minister Nhlanhla Nene and SARS commissioner Tom Monyane be ordered to appear before Parliament’s Standing Committee on Finance regarding allegations that the South African Revenue Service engaged a rogue unit to spy on taxpayers.

The Sunday Times reported that a KPMG report submitted to Monyane four weeks ago revealed that SARS blew more than R106-million in taxpayers’ money running “a covert and rogue intelligence unit” that spied on South Africans‚ and then repeatedly lied about its existence to the public.

It said the report recommended that former finance minister Pravin Gordhan should face a probe into whether he knew of the unit and that “SARS needs to engage the Office of the Public Protector and apologise for misleading her office“.

Responding to the report on Sunday‚ the DA’s deputy spokesman on finance‚ Alf Lees‚ said the Sunday Times had now “let the SARS rogue Spy Unit cat out of the bag despite the considerable efforts on the part of the‚ SARS Commissioner‚ Tom Monyane‚ to deflect attempts by the DA to have the report tabled for consideration by the Standing Committee on Finance”.

“Monyane did this by obfuscating that the report was a draft report‚ that it had been referred to the Minister of Finance and that it bizarrely did not form part of the SARS mandate despite having been commissioned by Monyane himself‚” Lees charged.

Given these latest revelations‚ the DA would now write to the Chair of the Standing Committee on Finance‚ Yunus Carrim‚ to call on him to require that Nene and Monyane appear before the committee before the end of November 2015 to brief it on the KPMG report as well as to take unrestricted questions from members of the committee‚ Lees added.

“This meeting of the committee must be an extended one over a minimum of two days in order to ensure that sufficient opportunity is given to fully explore the extent and ramifications of this disaster as well as to ensure that the Unit has in fact been dismantled and will never be established again‚” he said.

Lees noted that the damning report in the Sunday Times alleged that the rogue SARS Spy Unit:

•Its agents were referred to as “ghost employees”; and

“The attempts by the Chair of the Joint Standing Committee on Intelligence‚ Ms Connie September‚ to make the report and the SARS rogue Spy Unit an intelligence matter — as well as the reported attempt by Deputy Finance Minister‚ Mcebisi Jonas‚ to have the report classified as “top secret” — can logically be concluded to be attempts to protect certain highly placed cadres from further investigation and prosecution. This is reinforced by the report that Minister Mcebisi Jonas instructed that the KPMG report be “sanitised” to remove all blame from any individuals.

“There is undoubtedly an urgent need to fully and publicly investigate the role played in the SARS rogue Spy Unit by the Finance Minister and SARS Commissioner as well as the full operations of the Unit. The integrity of SARS must be restored in order to protect its ability to competently collect revenue‚” Lees stated.