Spare the rod and save the child 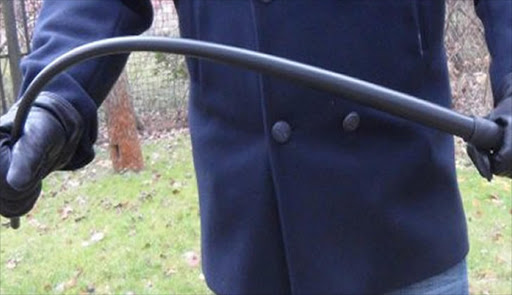 In the past few weeks we've heard about a few instances where the sjambok was used. Students at Elsenburg Agricultural Training Institute near Stellenbosch, Western Cape, had an altercation that involved the weapon.

A few navy recruits in Simonstown, also in Western Cape, did a drive-by whipping of cyclists and runners. Allegedly, Patrick Wisani, the ANC Youth League chairman for inner-city Joburg, also recently used it to whip his girlfriend to death.

The weapon seems to have a sinister relationship to power disparity. The one who wields the sjambok is usually more powerful - holds a position of power or has social power - than the person being attacked.

Violence seems to be tenacious. The tenacity lies in the fact that we grow up witnessing violence, and it becomes so normalised that we unconsciously repeat it.

The use of a sjambok, or to use a whip or a stick to hurt someone else, is one particular form of violence that is deeply embedded in our national psyche.

It used to be embedded in law, where sjambok lashes were a legitimate penalty issued by courts - usually by white magistrates on black accused.

The law was amended relatively quickly after our constitution was adopted. Flogging or lashes were no longer held as a legitimate penalty under our law.

It has become illegal to flog anyone in South Africa. One exception remains, and we maintain it in both our law and our attitudes.

Again, it is a situation of explicit power disparity.

In South Africa, you are not allowed to hit anyone with an object unless they are younger than 18.

The Torture Act does prohibit anyone from hitting another with an object, but our Children's Act still sanctions and allows the use of physical punishment against children, as our collective psyche apparently also does.

As children, we therefore get taught that when there is conflict between the one in power and the subordinate, it is legitimate to use violence. Hitting each other when in conflict is still so normalised that it is likely that the majority of South Africans would agree that it is not harmful to children to punish them physically.

A strategic mistake that we children's rights activists often make is to attempt to convince others with reason and logic that it is harmful. As one person said, "logic is very useful, but it is often distant from reality".

The motivation to keep on using the sjambok to hurt others comes from a deeper, more visceral experience of the weapon. It comes from the childhood experience that normalised it for us. Who can argue against that with mere logic?

As daunting as it may seem, this pattern also offers a solution for preventing violence.

I submit that we will not be able to reduce the use of sjamboks this year, or the next. I predict that we'll see the use of the weapon increasing for the next few years.

I do believe, however, that we can act now to turn the trend around in 30 years to come when our children are parents.

The way to do it would be to stop hitting, smacking, spanking, pinching, humiliating or harming them in any way whatsoever.