Surprise! Mom finds out during childbirth that she was carrying quadruplets 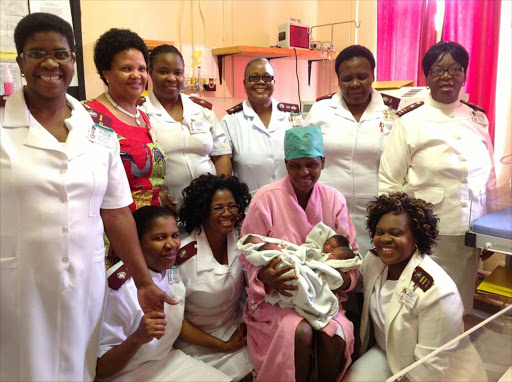 KwaZulu-Natal's Health MEC‚ Dr Sibongiseni Dhlomo‚ today congratulated a team of doctors and nurses from the Benedictine Hospital in the Zululand health district for successfully managing a surprise delivery of quadruplets at short notice.

Until last night‚ expectant mother Nobuhle Qwabe‚ 27‚ from Nongoma did not know that she was carrying three girls and a boy. Speaking from the hospital ward today‚ after giving birth last night‚ Qwabe said she had not been attending antenatal classes during the run-up to her delivery.

“I honestly didn’t know I was carrying four babies. I was surprised when the nurses told me I was carrying more than one child. I was really not expecting it. But when the doctors arrived‚ and the babies kept coming‚ I didn’t know what to say. I was shocked‚ but I’m excited now‚” she said.

Cuba-trained Dr Sibusiso Sithole‚ who is based at Nkonjeni Hospital some 50km away‚ said he was called to Benedictine Hospital by the nurses around 7pm last night‚ after they realized that Qwabe was carrying more than one baby. He went with Dr Kenneth Mbele‚ a University of KwaZulu-Natal medical graduate.

Dr Sithole said: “When Dr Mbhele and I arrived in the ward‚ we examined the mother and discovered that indeed there might have been one more baby in her. We then helped her deliver the second baby. We were quite surprised to learn that there was a third baby still coming. We then helped her deliver once more. Now‚ according to our training‚ triplets are far more common than quadruplets‚ so it would have been easy to assume that the third baby was the last‚ and that she had had triplets. But when we checked‚ we discovered a fourth baby. We were truly‚ truly surprised.”

According to Dr Sithole‚ the babies weighed between 1kg and 1‚3kg. The boy had his own placenta‚ while the three girls shared theirs.

“All the babies were healthy‚” he said.

Dr Sithole‚ who studied medicine at Santa Clara University through the Government’s Mandela/Castro Medical Doctor Training Programme‚ and has been a doctor for eight years‚ said: “I’ve delivered many sets of twins before‚ but I’ve never done triplets - let alone quadruplets. This has been a real miracle”.

Dr Sithole added: “This was not a one man show. I would also like to thank my colleague Dr Mbhele‚ and the nurses who were involved‚ and the mother for the co-operation that she showed during the delivery. She gave us no problems”.

The babies are being kept in hospital and will be transferred to a higher level healthcare institution for further care.

Qwabe is unemployed and lives with her grandmother and two sisters. She also has a nine-year-old daughter.

Commenting on the multiple birth‚ KwaZulu-Natal Health MEC said in a statement: "A surprise of quadruplets in a district hospital and so well-managed is a miracle. We wish both the mother and babies good life".

The MEC‚ however‚ issued an appeal to all pregnant mothers in the province to start antenatal care quite early in the pregnancy for optimal care of both mothers and newborns.

“It is a miracle that the mother was able to deliver the quadruplets without incident‚" Dr Dhlomo said.