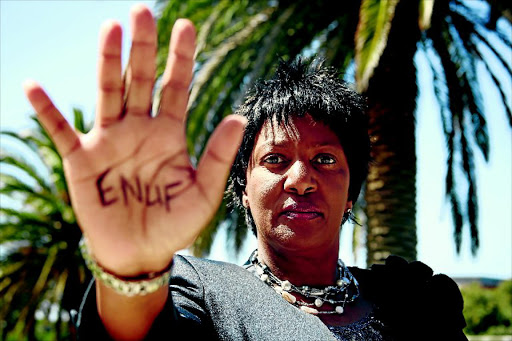 CHANGING ATTITUDES: Rape survivor Andy Kawa, who is launching her anti-gender violence campaign 'Kwanele!Enuf is Enuf', says she would have died unhappy if she had not done anything about her ordeal PhotoS: Eugene Coetzee

What was meant to be a few minutes' stroll on a Port Elizabeth beach before catching a plane back to Johannesburg brought businesswoman Andy Kawa to the harsh realities facing women in our violent society.

Kawa, 53, was brutally gang-raped in an ordeal that lasted about 15 hours in a secluded part of King's Beach at Summerstrand, Port Elizabeth, in December 2010.

As her perpetrators raped her, Kawa prayed and made a pact with God to fight against gender-based violence if she survived her attack.

Her horrific experience later led to theR40-million security upgrade at King's Beach sponsored by the Nelson Mandela Bay Development Agency (NMBDA) in her honour. In 2013, a plaque declaring the beach a safe zone was erected on the spot where she was raped.

This was followed by the launch in 2014 of the successful campaign, Kwanele! Enuf is Enuf!, which aims at spreading the word against sexual violence, help victims to break the chain of silence and to speed up the wheels of justice in solving cases.

Kawa runs the campaign by partnering with other organisations and groups who provide various services.

"My rape killed a big part of me. I'm yet to fully recover. Even my daughter sometimes tells me that she misses the old me and she wants this dark cloud to go away. The incident was a big turning point in my life and I told myself that I would die very unhappy knowing that I never did anything about it," says Kawa.

Other launches will be held at the University of Johannesburg this Friday and the Vaal University of Technology today. Already 19 tertiary institutions in SA have agreed to be a part of Kwanele!

B Kawa, who holds an MBA in finance from Wharton Business School and a Masters in Education from Columbia University, both in the US, is also a sharp businesswoman. She is the chairwoman of Interwaste Holdings and serves on the board of Anglovaal Industries.

She is also a trustee at Chuma Foundation, the beneficiaries of which are youth development projects.

Port Elizabeth-born Kawa is a former teacher in the Eastern Cape and has lived and worked in the US and UK between 1985 to 1996 before returning to SA.

She says universities are an obvious choice to bring about change. "Students have been known for their militancy and changing the paradigms of history, so I decided to contact universities to lobby for the campaign. I was very persistent.

"My presentation was taken to Hesa (Higher Education of SA, later renamed Universities South Africa) and they liked it and it was endorsed in 2014. Now I'm rolling the campaign out to universities."

She says hers was not an activity-based campaign as she hoped the zero-tolerance attitude against sexual violence would be adopted throughout the year and to protect victims. She adds that SA is considered the rape capital of the world, where a woman is raped every 30 seconds but only one in nine cases gets reported.

"We want to break the silence and the stigma that the community put on the victims. Rape is the only crime after which the victim is treated like a perpetrator. The victim has to prove beyond reasonable doubt that he/she did not call for what happened."

Kwanele's launch at Unisa helped Stephina Thobane, a criminology lecturer, to come out about her own rape experience when she was 10 years old.

"The campaign captured my eye because I've been wanting to talk to someone but I never had the courage because the shame and the stigma caused my family to shy away from it.

"I posted my experience on Facebook and I was surprised by the number of messages I got from people who were in the same situation. It takes courageous people like Andy to help us break this trend," says Thobane.