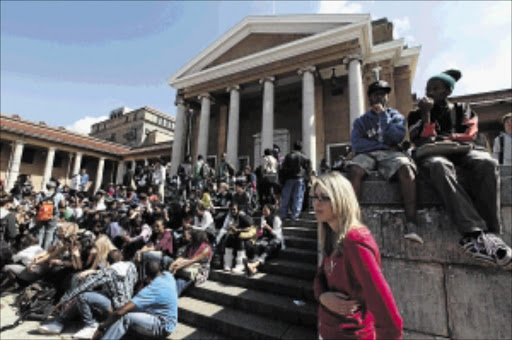 The Students’ Representative Councils from five institutions in the country have released a joint statement acknowledging their support for the academic and cultural boycott of Israel.

The announcement was made during a press conference held in the Miriam Makeba Hall at the University of South Africa‚ Pretoria on Monday.

“This day will go down in history as we announce the resolutions adopted by our University Student Representative Councils (SRCs) to join the academic and cultural boycott of Israel.

“Today we follow the mandate provided in 2011 by the South African Union of Students (SAUS‚ which represents all SRCs in the country) which urged all SRCs‚ student groups and other youth structures to strategise and implement a boycott of Israel.”

SAUS declared in August 2011 that all South African campuses must be apartheid-Israel free zones.

“Today we join the ranks of the SRCs of Wits University and the University of Cape Town‚ who also resolved to join the academic boycott of Israel in 2012 and 2014 respectively.

“We also join the revolutionary decision by the University of Johannesburg that in 2011 terminated its relations with Israel’s Ben Gurion University.

“Finally and most importantly‚ our Boycott‚ Disinvestment and Sanctions (BDS) resolution in support of the boycott of Israel follows South Africa’s Minister of Higher Education and Training Dr Blade Nzimande’s call and support for the academic boycott of apartheid Israel.

The SRC presidents announced that they are also in bilateral engagement with other South African SRCs to also adopt such resolutions and awareness-raising campaigns such as the annual Israeli apartheid week initiative.

They will also support the call for an Israeli academic boycott conference in South Africa with the minister Nzimande.

“Our resolutions in support of the BDS movement comes

less than a year after Israel killed more than 2 000 Palestinians‚ of which over 500 were children under the age of 18. Israel also attacked several schools of the United Nations‚ over 200 Palestinian schools and a school for disabled children.

“The Israeli regime is proving itself to be anti-children‚ anti-student and anti-education. We are here to stand for peace‚ justice and equality.

“We are against all forms of racism‚ including anti-semitism and Zionism.”

The group also condemned the pro-Israeli lobby for falsely accusing those critical of Israel of being anti-Semitic.

However‚ they welcomed the support provided by progressive Jewish organisations‚ comrades and counterparts for the BDS movement and the Palestinian struggle.

of South Africa‚ was chosen for today’s press conference. The cultural boycott of apartheid South Africa in the 1980s (which Miriam Makeba was part of) is currently being employed against apartheid Israel.

“We join Miriam Makeba in declaring ‘A Luta Continua’ until Palestine is free‚ for‚ in the word of former President Nelson Mandela‚ a graduate of Unisa: “we know too well that our freedom is incomplete without the freedom of the Palestinians.”