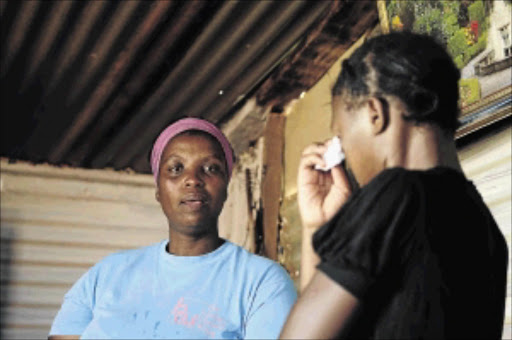 HARD TIMES: Tearful Mathabo Mosanteli of Orange Farm, south of Johannesburg, explains how she has been struggling to find a special school for her daughter who dropped out of normal school because she is a slow learner Photo: Thulani Mbele

SHE is in her late teens, but can't read or write. This is because she cannot find a school for children with special needs like her.

She is one of many thousands of children with learning disabilities affected by the dire shortage of specialised schools.

According to the department of basic education's report "Education Statistics in South Africa 2012", published last year, there are only 444 special needs schools in the country, a far cry from the 24282 ordinary schools.

More worrying, the 2013 South Africa Baseline Country Report: UN Convention on the Rights of Persons with Disabilities revealed that the number of children with disabilities of school-going age not in school "could be as high as 480036".

This is despite the constitution, SA Schools Act, and Children's Act, saying all children have a right to basic education.

The teenager's mother, Mathabo Mosanteli, said her daughter was a slow learner and teachers were not coping with her and she had to take her out of school.

The teen last attended school when she was seven for a few months.

"All I want is for her to be at a school and mingle with other children."

The teen said she wanted to be like other children and go to school.

"I want to learn how to write, read and do homework," she said.

Advocate Bokankatla Malatji at the South African Human Rights Commission said the limited number of schools was the biggest contributing factor why most children with disabilities were not attending school.

He said though the department was preaching inclusive education where pupils with disabilities would be accommodated at mainstream schools, it was not assisting.

The department said about 513 mainstream schools admit children with a disability .

But Malatji said inclusive education came with many challenges, such as a lack of learning material like Braille books and teachers not being skilled enough to teach them.

Principal of Adelaide Tambo School in Soweto, Lindelani Nemani, said the school was the only one catering for children with physical disabilities in all of Soweto.

Children with physical disabilities include those in wheelchairs, on crutches or with a hunchback.

Nemani said the problem was so big the school has pupils from as far as  KwaZulu-Natal, Eastern Cape, Free State and North West.

The school usually has 20 to 30 children on its waiting list and  this was a big number for special needs because 20 children can make up two classes, he said.