'28% of schoolgirls are HIV positive' 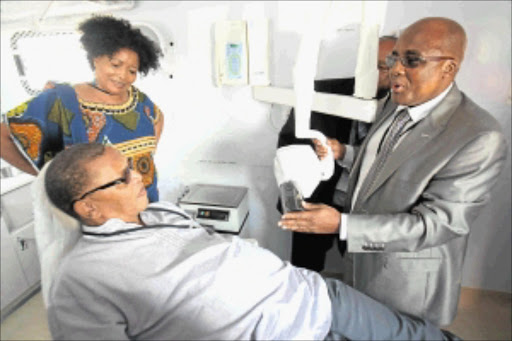 AT LEAST 28% of schoolgirls are HIV positive while only 4% of young boys are infected with the virus in the country.

Health Minister Aaron Motsoaledi said this was a clear indication that old men were sleeping with young girls - a statistic he said "destroyed my soul".

AT LEAST 28% of schoolgirls are HIV positive while only 4% of young boys are infected with the virus in the country.

Health Minister Aaron Motsoaledi said this was a clear indication that old men were sleeping with young girls - a statistic he said "destroyed my soul".

"It is clear that it is not young boys who are sleeping with these girls. It is old men. We must take a stand against sugar daddies because they are destroying our children," Motsoaledi said.

Motsoaledi was speaking at the National Council of Provinces' "taking parliament to the people" event held at Silobela Stadium in Carolina, Mpumalanga, yesterday.

Motsoaledi said 94000 schoolgirls fell pregnant across the country in 2011. "Some [pregnant pupils] are known to the department of education, but there is a number which the education department does not know about.

"[About] 77 000 girls had abortions at public facilities. We can no longer live like that. We want to put an end to it," Motsoaledi said.

He said some pregnant girls - aged between 10 and 14 years of age - tested positive for HIV.

Motsoaledi said of the 52 districts in the country, Gert Sibande district in Mpumalanga topped the list with a high number of HIV-positive people.

"There is also a high number of TB infections ... there is a lot of death and a lot of illness here. It is for this reason that we chose the district to be one of the 11 in the country where the National Health Insurance programme will be piloted."

He said he met with Premier David Mabuza and his cabinet last week to discuss health issues in the province. "There are 50 clinics in the district and eight hospitals. We will demolish two hospitals and build new ones. Some clinics will be refurbished. All this will start in the coming financial year [starting on April 1]," Motsoaledi said.

The minister said every man in the Gert Sibande district should be circumcised.

Mpumalanga residents asked that clinics operating 12 hours a day should be open all day and night.

They also complained about shortages of medication and ambulances that took too long to arrive in their areas.

Newly appointed MEC for health Candith Mashego said the issues would be attended to. - mashabas@sowetan.co.za

Exclusive stories in the paper today: