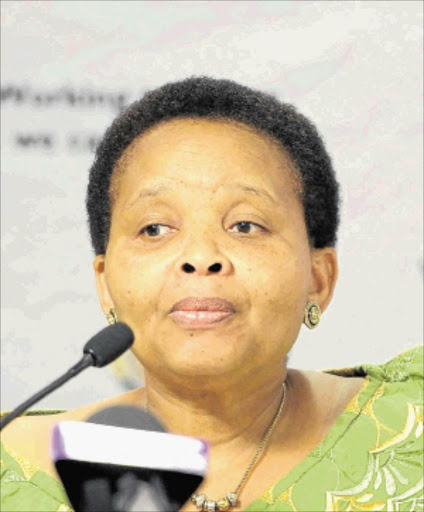 MINISTER for Women, Children and People with Disabilities Lulu Xingwana has called for stricter gun control.

Xingwana said if there had been no firearm in Oscar Pistorius' home Reeva Steenkamp would still be alive today.

"I am disappointed that Oscar got bail, but I respect the process of the courts and I am pleased strict (bail) laws were set. The real trial has not started yet. It starts in June and we are looking forward to it in court."

Xingwana said domestic violence became even more deadly when legal - or illegal - guns were present in the home, because they could be used to threaten, injure or kill women and children.

"We must all be concerned at the growing reports of women who continue to die at the hands of their partners or are abused by people who are supposed to protect and love them," she said.

"Domestic violence is exacerbated by easy access to guns. We are making a call for stricter gun control."

Xingwana said the focus should be on mobilising communities to join the fight.

She reiterated the call to courts to impose the heaviest possible sentence against perpetrators of women and child abuse.

"Ensure that policies, legislation and other measures, that are sought to eliminate the abuse of women, children and people with disabilities, are effectively implemented and monitored," the minister suggested.

But Xingwana said she did not believe measures such as chemical castration would help end the spate of rapes.

"We cannot correct one wrong with another wrong," she said. "For me to inject or put a chemical in your body, you must agree and if you don't it is a crime.

"We are calling for firmer, harsher sentences," she said.