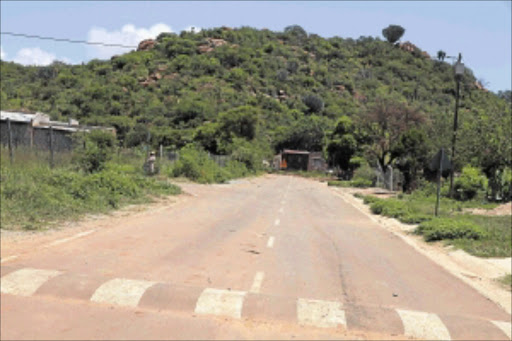 UP THE HILL: Masehlaneng village near Mahwelereng in Mokopane, Limpopo, where a 13-year-old girl got married to a 57-year-old traditional healer . PHOTO: ELIJAR MUSHIANA

BARELY a teen and already she is a housewife. A 13-year-old Limpopo girl is now the second wife of a local sangoma in a village near Mahwelereng in Mokopane. She was married early this month to a man 44 years her senior.

The girl, described by Magene Primary School principal Olga Mokonyama as "a bright pupil who was doing well in class", was in Grade 6.

When Sowetanyesterday visited the family of the young "wife" in GaMitchel village near Mahwelereng, they confirmed they had accepted R5000 ilobolo for her, despite her age.

Her 53-year-old mother, who cannot be named to protect her daughter's identity, admitted to receivingilobolofor her fourth child.

The woman has five children.

The girl's father reportedly lives in Bela-Bela (formerly Warmbath), after her parents' divorce.

The woman said her daughter fell ill in 2010 because of epilepsy and would "faint at any time".

She said her daughter's situation worsened as time went by and she was advised to seek help from the sangoma.

"We took her to the sangoma, where she underwent treatment for two years. And she was healed," her mother said.

She said the 57-year-old sangoma told the family the girl was being troubled by ancestors and that she needed to be closely monitored.

He offered to marry the girl.

"We had no choice but to agree to his (the sangoma) suggestion because we wanted her to be healthy," she said.

The girl's uncle, 47, echoed the mother's sentiments. He said the family was poor and could not afford to pay for the girl's treatment, which forced them to accept the marriage.

An angry villager reported the matter to social workers in the area.

The police were informed and the sangoma was subsequently arrested on Wednesday last week.

Mahwelereng police spokesman Captain Sebotsaro Motadi said: "We arrested the sangoma on Wednesday last week and he was supposed to appear in (Mokerong Magistrate's) court the following day."

He was released on the day he was supposed to appear in court because the court decided to withdraw chargesbecause the girl's parents had consented.

"It was on the basis of the court's decision that we decided to leave the matter," he said.

Motadi said the sangoma was charged with statutory rape.

The sangoma yesterday confirmed marrying the girl as his customary wife.

"There was no use of force in the marriage. It was a mutual agreement between both families," he said, referring to the girl's mother as his "mother-in-law".

The sangoma also said his culture allowed him to marry anyone over 12 years and that he was not in the least embarrassed.

Fellow villagers, who spoke on condition of anonymity, yesterday expressed shock at the girl's marriage, saying the incident was a first in the area.

"We are shocked and do not approve but we cannot do anything since the parents seem to have agreed to the marriage," said a neighbour of the girl's family, who preferred anonymity for fear of victimisation.

Another resident, who also asked not to be named, said: "The whole village was shocked to hear of the arrangement between the sangoma and the girl's family.

"We only hoped the police would rescue the young girl because we believe her rights have been violated."

Medupi Simasiku, spokesman for the National Prosecuting Authority, yesterday said the matter was being investigated. - frankm@sowetan.co.za

This article first appeared in the Sowetan newspaper on 30 January 2013. The newspaper carries exclusive articles everyday. Be sure to buy yourself a copy to BE IN THE KNOW, ON THE MOVE