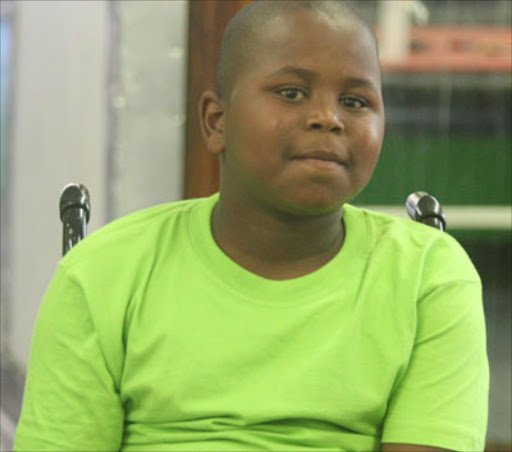 Ntando Mahlangu, 10, will be able to walk again once he learns to handle his new prosthetic legs

THE grandmother of a boy who was fitted with prosthetic legs following a double amputation is very happy and says the child's dream has come true.

This was after Ntando's legs were amputated in May this year.

Speaking from her home at Tweefontein in Mpumalanga, Ntando's grandmother Pauline Mahlangu, said: "I was so happy when they told me on the 18th (September) that they'd give him the legs for free. Now he can run."

Ntando was born with a condition called hemimelia, which means he had no bones in the lower part of his legs.

Mahlangu is his legal guardian as his mother is sick and unable to care for him.

Ntando was given crutches to assist him with the blades as he is unable to walk and stand without assistance yet.

"He takes them off sometimes when he watches TV," his granny said.

Before the amputation, Mahlangu said Ntando had to crawl everywhere he went.

Elmari Smit, a physiotherapist from Icexpress Progressive Prosthetics, said: "The doctor was unable to save Ntando's legs because they were angled too much and had to amputate below the knee."

Mahlangu said she had been told the blades would cost R39,000 for one leg.

Ntando was referred to the Jumping Kids Prosthetic Fund, a non-profit organisation, after his operation at Steve Biko Academic Hospital.

The organisation was founded by Johan Snyders, the CEO of Icexpress Progressive Prosthetics.

"We want to give kids that magic moment of being a kid. Being a child is something you can't buy with money," Snyders said.

Ntando said: "I am very happy with the blades. I will be like Oscar (Pistorius) because I like to run."

Further rehabilitation will be done so Ntando can learn to walk and run as well as walk on different surfaces such as grass and pavement.