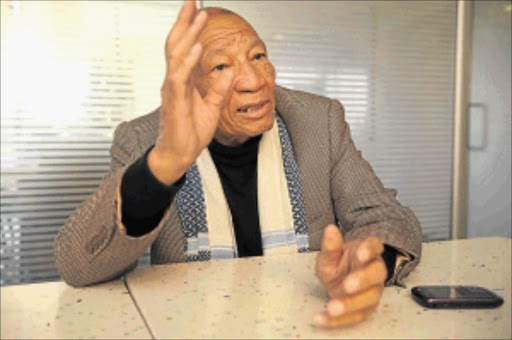 LITERARY and struggle icon Don Mattera is crying foul at not being paid for his services by Adele Lucas Promotions.

Mattera, 77, said he was contracted by the managing director of Adele Lucas Promotions, Toby Chance, to assist in a proposal to the City of Johannesburg for the reopening of the city library.

The award-winning poet and writer said he charged R50,000 for his services during the proposal to the City of Johannesburg as well as to perform at the official launch on February 14.

"I told them my fee is R50,000, non-negotiable, then I told them that if anything happened in between or after the pitch and you may not require my services, you will have to pay me half of the money," Mattera said.

After the pitch had taken place, Mattera said, he was told by Chance that "the people" did not want him to be part of the launch.

Mattera said he accepted the decision and asked for the R25,000 they had agreed on. Chance said Mattera had made the stipulation, though the company did not agree to it.

Mattera said he was an elderly man suffering from various chronic illnesses and needed the money to pay for his medication, living expenses and those of his youngest child.

The pitch to the City of Johannesburg took place in January but Mattera has yet to be paid.

"Mr Chance told me that definitely by the end of March I will pay you. April, May, June, he does not return my calls," Mattera said.

Chance said Mattera was involved in the proposal but not in the launch, so he would not be paid the full amount.

"He did not participate in the launch, so he did not honour the agreement and whatever we give him for his services would be a gratuity," Chance said.

"Your call actually reminded me about this matter. I will call Mattera.

"There is a contract that needs to be completed so the final payment will be made when that is done.

"It should be soon." - nkosin@sowetan.co.za