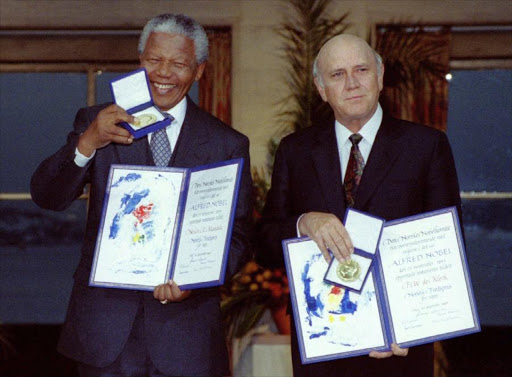 Speaking to CNN’s Christiane Amanpour, [click here for the video link], De Klerk apologised for the racial policies of the white-minority government that oppressed the black majority, but defended separate states for blacks and whites.

“I have made the most profound apology... about the injustices which were wrought by apartheid,” he told Amanpour.

“What I haven’t apologised for is the original concept of nation states.”

He was referring to the homeland system that once divided South Africa into states for different ethnic groups. Apartheid laws also required blacks to hold permits to live and work in white areas.

De Klerk received the Nobel Peace Prize jointly with Nelson Mandela in 1993 but was later criticised by Mandela, who became South Africa’s first black president in 1994, for not renouncing apartheid.

“To justify apartheid in 2012? Wow!” Gugulethethu Mthembu wrote on Twitter.

Others challenged De Klerk, who was awarded the Nobel Prize for releasing Mandela in 1990 and allowing multi-racial elections four years later, to make such remarks in Soweto, the largest of South Africa’s black townships.

“Can FW de Klerk come home and repeat those words he said on Amanpour in front of a live audience in Soweto?,” Florence Masebe tweeted.

Others called on him to return his Nobel prize.

In the interview, De Klerk said apartheid was “morally repugnant” and added that, with hindsight, his party should have instituted reforms earlier.

Even though it has been 18 years since apartheid ended, it remains the source of deep division in the “Rainbow Nation”.

MORE FROM THE INTERVIEW:

It was noted that Mandela had once called De Klerk "a man of integrity" but had taken it back, regretting that De Klerk had never renounced the principle of apartheid.

De Klerk responded:  "Well, let me first say I'm not aware that Mr Mandela says I've never renounced apartheid". He then said, "I have made the most profound apology in front of the Truth Commission and on other occasions about the injustices which were wrought by apartheid".

Then he added: "What I haven't apologized for is the original concept of seeking to bring justice to all South Africans through the concept of nation states (homelands). But in South Africa it failed," he said. "And by the end of the '70s, we had to realize, and accept and admit to ourselves that it had failed.  And that is when fundamental reform started".

Still, De Klerk would not back off his belief in the validity of the original concept of "separate but equal" nation states.

"There is this picture that apartheid was.. used to be compared to Nazism. It's wrong, and on that, I don't apologize for saying that what drove me as a young man, before I decided we need to embrace a new vision, was a quest to bring justice for black South Africans in a way which would not - that's what I believed then - destroyed the justice to which my people were entitled.

"That's how I was brought up," said De Klerk. "And it was in an era when also in America and elsewhere, and across the continent of Africa, there was still not this realization that we are trampling upon the human rights of people.

Again, he was asked if he wanted to take the opportunity to say that apartheid was, in retrospect, morally repugnant.

"I can only say, in a qualified way," said De Klerk. "Inasmuch as it trampled human rights, it was - and remains - and that I've said also publicly, morally reprehensible.

"But the concept of giving as the Czechs have it and the Slovaks have it, of saying that ethnic unities with one culture, with one language, can be happy and can fulfill their democratic aspirations in an own state, that is not repugnant.

"With the advantage of hindsight," said De Klerk, "we should have started the reform much earlier.. But the intention was to end at a point which would ensure justice for all.

"The tipping point in my mind was when I realized.. we need to abandon the concept of separateness.  And we need to build a new nation with its eleven official languages, accommodating its diversity, but taking hands and moving forward together."