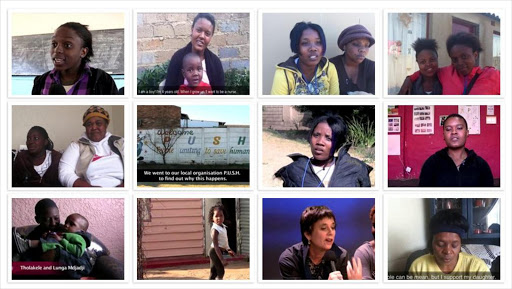 These are real-life experiences shared by a group of teenagers as part of a campaign that states: 'A Global Girl reporter believes in the power of her voice to change the world'.

GLOBALGIRL MEDIA is an American-funded programme that aims to develop the voice and self-expression of teenage girls in historically disadvantaged communities by training them to become citizen journalists, harnessing the power of new digital media to inspire self-esteem, community activism and social change.

The GGM programme supplies the equipment, education and support necessary to help girls create content that authentically reflects their lives and communities.

It was launched in June-July 2010, training 22 high-school girls, age ranging from 15 to 22 years old, in Soweto and 10 girls in inner-city Los Angeles, California to become new media citizen broadcast journalists for the 2010 FIFA World Cup, with the support  of the U.S. Consultate Johannesburg, NIKE Foundation and ESPN.

In 2011 GGM trained 10 HIV positive girls with support from the U.S. President’s Emergency Plan for AIDS Relief (PEPFAR). They partnered with South African NGOs and organisations involved in after-school enrichment programmes for girls and HIV/Aids including the Olive Leaf Foundation, P.U.S.H, Ekasi Womens Arts Ensemble, the Rotarians of Johannesburg, the Star programme at the US Consulate in Soweto, the Teboho Trust and the Ubuntu Education Fund in Port Elizabeth, to source the girls who participated in the programme.

The stories young GGM reporters produced "are powerful reflections of the challenges these young girls face every day", Tumi Mosadi, SA Programme Director, said in a statement explaining the initiative.

Amongst these stories are:

NEXT UP: THE UK AND USA

The reporters produced a compilation documentary featuring their stories, called 'Our World My Voice: A GlobalGirl Media South Africa Report', which was screened at the U.S. Consulate in Johannesburg and at 10 neighbouring high schools during the week of World Aids Day 2011.

The documentary has been selected to be screened at the Youth Cultural Olympiad, part of the global Olympic initiative in the U.K in September 2012. Young film-makers, artists, actors and musicians representing 160 countries will be in Nottingham, England for 10 days of presentations, performances and exhibitions.