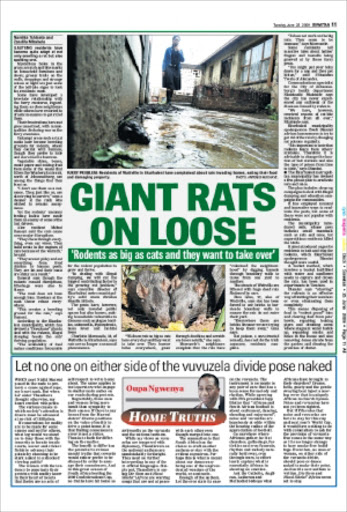 THE city of Johannesburg has enlisted the services of owls to rid Alexandra township of rodents.

Situated north of the city, the township is home to fat rodents, some as large as cats.

Having been tormented by these "wild domestic cats" for years, residents can now look forward to whether the new owls innovation will bring some relief.

The city will launch the Owl Box Project next Friday.

Johannesburg's head of health and social development Nonceba Molwele said the city would use three natural ways to eradicate the nuisance - owls, rat cages and fumigation.

"In order to achieve this natural process (of using owls), the city has partnered with EcoSolutions amongst other partners.

"This project will be running in Alexandra for the next three years, and has so far involved educating the local communities and schools on the role that owls play in eradicating rats. The education covered the myth and beliefs that associated owls with witchcraft," she said.

While rodents are associated with filthiness, black people generally associate owls with witchcraft and evil spirits.

Molwele said the city and EcoSolutions had been working with three schools - Zenzeleni primary, Iphuteng primary and Minerva secondary - for the introduction of the owl project.

"The owl nesting and release boxes have been installed in all three schools. This has helped them to learn and understand the role that owls play in controlling and managing rodent populations.

"To encourage community participation in the project, a selected team of school children will be feeding the owls for 21 days with food provided for by EcoSolutions."

Molwele said residents should stop using poisonous pest control substance like ratex "because should an owl eat a poisoned rat, that would have the same effect to the owl, it will kill the owl".

"Prevention is, however, the best solution for rat control. We have to eliminate the conditions in which the rodents thrive and for this we need the active co-operation of all residents of Johannesburg. Illegal dumping and the careless disposal of food and waste material are the primary causes of rodent infestation.

"Illegal dumping attracts rodents and provide them with a comfortable environment to nest and continue breeding," Molwele said.