ANC and DA square up 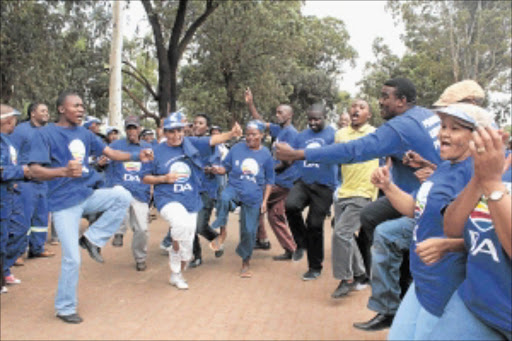 TENSIONS ran high between ANC and DA members at Sicelo Shiceka informal settlement in the Vaal during the by-elections yesterday, forcing police to separate them.

Members of the DA broke into a song calling President Jacob Zuma a rapist, while ANC members responded by saying DA leader Helen Zille was a prostitute.

The two warring parties were contesting a by-election in ward 8, which became vacant after ANC councillor Johannes Malea died in December.

The ANC accused the DA of busing in its supporters from outside the informal settlement.

An ANC member and Sedibeng mayoral spokesman, Dan Manoeli, said the DA had previously registered outsiders in the ward.

DA spokesman John Moodley denied that his party had brought its supporters from outside to vote in the ward.

"The ANC is fearful because they see that they are going to lose," he said.

Fourteen vacant wards in six provinces were also being contested by political parties across the country.

A total of 49 candidates were fielded by political parties except at ward 6 in Umzimvubu in the Eastern Cape, where the ANC's candidate Xoliswa Jona was uncontested.

The ward became vacant when an ANC councillor resigned.

Most of the by-elections were held in the Eastern Cape. Ward 4 in eMalahleni municipality was contested between ANC candidate Lumka Mapete and Cope's Mazwi Adonisi. The ward became vacant when an ANC councillor died.

Cope, the ANC and an independent candidate contested ward 13, which was also led by an ANC councillor before he resigned.

Another ward in Bizana which was previously led by the ANC was heavily contested by candidates from the ANC, Cope, National Freedom Party and the African Peoples' Convention.

Two by-elections were held in KwaZulu-Natal, ward 56 in eThekwini and ward 12 in Nongoma.

Free State, Limpopo and the Western Cape had only one by-election each.