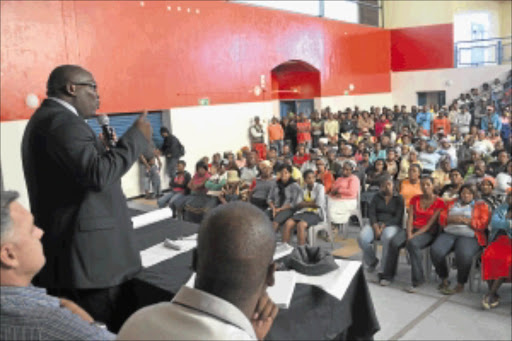 POLICE had to be called when residents of Khayelitsha refused to allow the Western Cape human settlements MEC to leave a meeting after a row broke out concerning the allocation of new RDP houses.

This after MEC Bonginkosi Madikizela had allegedly failed to answer some questions regarding the allocation of houses in Mfuleni section.

Madikizela was escorted out of the meeting unharmed.

The meeting was attended by about 300 people, including ANC ward councillor Luvuyo Hebe.

About 900 residents of TR section, an informal settlement in Khayelitsha, and another 300 people from Mfuleni are set to benefit from a new housing project in Mfuleni, near Cape Town.

Addressing the meeting on Monday night, Madikizela said: "We have decided that people who will benefit from the project are those whose houses in TR section were flooded by the heavy rains.

"We will also give houses to people who have been staying in the area (TR section) for many years."

When Madikizela said he did not know what would happen to non-beneficiaries, the residents protested, claiming he was dividing the community.

They also accused him of instigating violence in their area.

Madikizela also said: "In order to be provided with a house, you must meet certain requirements. People tend to call their relatives or friends to occupy their old houses once they get new ones.

"We will make sure that this does not happen."

Madikizela also warned the project's beneficiaries not to sell their houses and return to informal settlements.

"We will take action against such people," he warned.

Residents wanted to know why some people were getting houses while others had been denied the opportunity.

Resident Ntombikayise Gomba said: "All residents in the area want to benefit from the project. I am not sure if I will get a house."