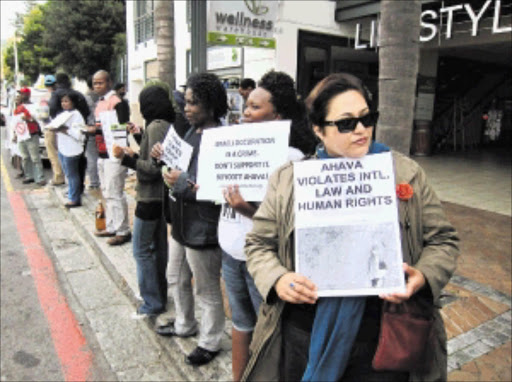 Lining up in the forecourt of the retail store in Cape Town's up-market Kloof Street on Saturday, human rights activists called a boycott of the business outlet.

They held up placards and sang. Some placards read: "Boycott Ahava for a free Palestine", "Israel occupation is a crime, don't support it, boycott Ahava" and "Wellness Warehouse remove Ahava products made in Occupied Palestine".

They accused the owners of violating international law and "infringement of the rights of the Palestinian people".

'The Ahava products were falsely labelled to appear as though they were from Israel, yet in fact were made in the Israeli settlement Mitzpe Shalem in the occupied West Bank," one of the protesters said.

Daniel Kamen, Open Shuhada Street (OSS) education coordinator said they stood for the rights of both Palestinians and Israelis. The OSS organised the protest.

He said his group would take up the issue of false labelling with the National Consumer Commissioner.

He said that before they took to the streets since last August they had tried to sort out the matter through correspondence with Wellness Warehouse chief executive Sean Gomes.

"We appealed to Wellness Warehouse's claim that it 'cares for the earth and its people', and requested that Gomes discontinue the sale of Ahava.

"Wellness Warehouse refused to comply with our request."

In response to the request Gomes had said that his store was but "one of a number of retailers, health shops and spas", in SA that stocked the products.

"Wellness Warehouse is not the importer, but purchases Ahava from a local importer.

If a product is deemed to be contravening any law and this is confirmed and sanctioned by the South African trade authorities and government, we will take the necessary action at that time," said Gomes.