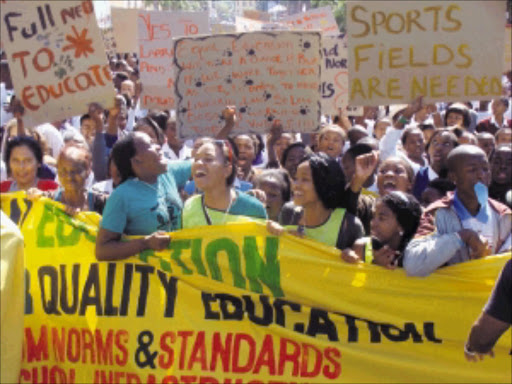 ABOUT 20,000 pupils from various schools across Cape Town marched on Parliament yesterday, appealing to the Department of Education to build libraries and to adopt "norms and standards" for all schools in the country

The march was part of Equal Education's campaign to put pressure on the national education Ministry to build infrastructure, including libraries, at schools.

Activist Zackie Achmat said he was saddened that Basic Education Minister Angie Motshekga had gone to Zuma's event instead of attending the Equal Education march.

Only 8percent of public schools in the country had fully functional libraries, according to Equal Education spokesperson Yoliswa Dwane.

Dwane also called on Motshekga to keep her promise to come up with minimum norms and standards for all schools by April 1.

These norms and standards will set out the bare minimum needed by all schools across the country, and are intended to end the situationin which some pupils are taught in mud huts and others in "buildings that look like universities".

Dwane said only 7847 schools had municipal flush toilets, while 970 still did not have any ablution facilities.

She said only 10percent of schools had stocked computer laboratories.

Dwane said the reason for pupils being unable to read, write and count was because the majority of pupils still experienced poor quality education and unequal access to resources.

A Grade 12 pupil at Harold Cressy High School, Qhayisani Mxhego, said he marched because education was a basic right that should be fulfilled by the government.

Another Grade 12 pupil at Hector Pieterson High School said: "We need the same quality of educators and resources."

Sadtu general secretary Mugwena Maluleke said that to have a good pass rate at the end of the year schools needed to be equipped with quality teachers and better infrastructure.

"It is the responsibility of the government to ensure quality education at all schools in this country," Maluleke said.

"We are calling for the Education Department to keep its promise to implement norms and standards in public schools."