Hofmeyr under fire over racist rant 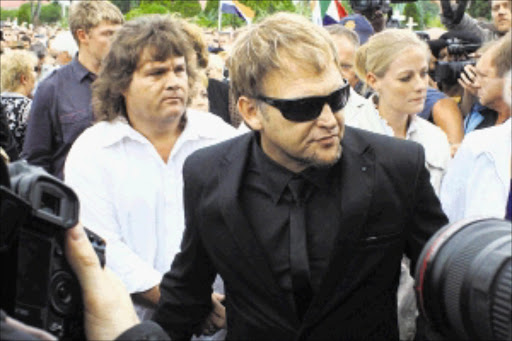 THE Shout Foundation is reconsidering Afrikaans singer Steve Hofmeyr's ambassadorship after his racist Facebook rant about blacks and crime.

Responding after the murder of Attie Potgieter, his wife Wilna and their three-year-old daughter Willemien on their farm in the Free State on Wednesday, Hofmeyr spilt his outrage on his Facebook page last Friday saying: "Blacks (God knows, probably not all of them, but most of those I observe) feel justified and 'entitled' in everything, from quotas-low matric marks to land rights-brutality.

"Sorry to emphasise the colour, but I'm struggling to spot the terrible whites who climb over blacks' walls to do that to their children."

Hofmeyr, who has more than 89300 fans on the social networking site, is one of more than 50 musicians who are affiliated with the Shout Foundation, which stands for South Africans against crime and to promote safe communities.

Shout was established earlier this year by musicians Danny K and Kabelo Mabalane after the musicians were outraged at the brutal murder of reggae music legend Lucky Dube, in Rosettenville, Johannesburg, in 2007.

But the organisation yesterday was not pleased with Hofmeyr's comments, stating that they "wish to disassociate ourselves from his comments".

The foundation's chief executive, Gavin Koppel, said the organisation has "no place for racial slurs or pointing of fingers based on race".

"Crime knows no colour and does not discriminate. We are all affected," he said.

"Hofmeyr's comments are completely out of step with what we at Shout stand for. While we encourage freedom of speech, we do not and will never encourage racist remarks or ones with racial undertones," said Koppel.

"The foundation has asked Hofmeyr to explain himself. We are awaiting a response.

"Once we get it, we will decide on Hofmeyer's future as a Shout ambassador."

Hofmeyr's comments were not taken kindly by Internet users.

More than 150 people reacted to the story, saying Hofmeyr was "racist", a "hypocrite" and "an idiot". Only a few agreed with his views.

RETAIL wrote: "Steve, you are pathetic and ridiculous, your rantings are no different to the verbal diatribe that Julius Malema espouses!

"I suppose that all white Afrikaners are paedophiles too, judging by the despicable acts perpetrated by a family of white Afrikaners in PTA North, against their children, grandchildren and mentally handicapped relative," the person said.

KasiKid wrote: "Those are words of a hypocrite who doesn't Shout when a black kid is shot dead mistaken for a monkey or a dog but only Shout when whites are killed by blacks."

See more of our cartoons on the Fun  Stuff page