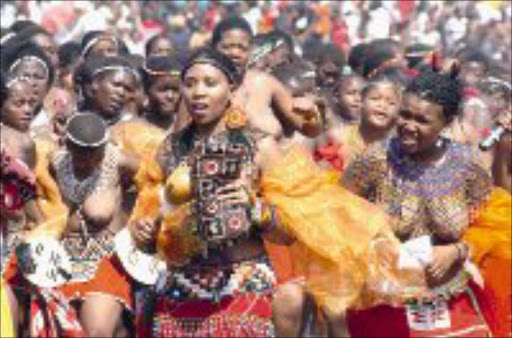 King Goodwill Zwelithini has condemned the distortion of Umkhosi woMhlanga (Reed Dance) by historians, who he accused of deceiving members of the public.

He also took a swipe at the new Children's Act, which criminalises virginity testing for girls younger than 16.

More than 50000 maidens gathered at Enyokeni Royal Palace at KwaNongoma in northern KwaZulu-Natal for the annual ceremony and danced before King Zwelithini and other dignitaries.

Despite the controversy surrounding the event, the number of maidens has increased over the years.

King Goodwill said the nation should stand together to defend such cultural practices.

"We will not be forced out of our culture. There is no one that will tell us how to observe our cultural traditions," he said.

"There is no one who forces maidens to attend the ceremony. As a nation, we must not allow people to talk about our culture while they know nothing about it."

The king stressed people should stop commercialising the virginity inspections.

"It's annoying that there are people who have turned this cultural event into a business.

"Our culture is our pride and virginity testing could be the solution to HIV-Aids that's destroying our nation.

"I'm happy because the virginity inspectors have gone all over the province, not for me, but for the nation," he said.

Mangosuthu Buthelezi, chairman of the provincial house of traditional leaders, urged men to abstain from sex.

"We have many people who have died of HIV-Aids, my own two children too," he said.

Meanwhile, drama unfolded when an Italian couple was arrested and detained for more than 30 minutes after taking pictures of maidens without accreditation.

At the same time women wearing pants were prevented from entering in the royal palace.

King Goodwill said there were no problems with women wearing trousers, but not at a cultural event such as the reed dance.