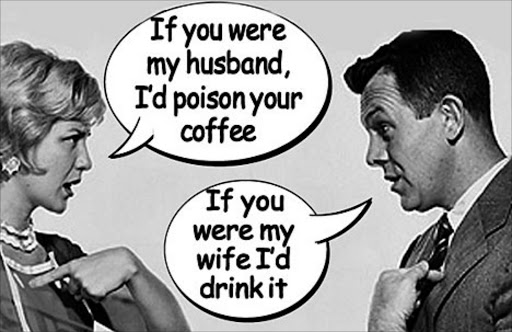 For such a woman nothing you do seems to be good enough.

Once in a while men fall in love with a ‘crazy’ woman and she drives him up the wall. Friends will ask; ‘why are you tolerating such woman?’ But no one ever knows why except for the one who is in love.

Is it because of love?

Let’s start by defining ‘crazy’ – a woman who is somewhat troubled hence they have a potential of driving a man mad.

Honestly speaking, men love women who challenge them but when dating a ‘crazy,’ there is an over emphasis on challenge and ‘freedom of expression’.

For such a woman nothing you do seems to be good enough; everything that comes out of her mouth sometimes seem like venom which puts such a strain on the relationship.

Don't let it bring you down.... here are ten ways to handle a ‘crazy’ woman as a man.

Sometimes a woman will be angry for no apparent reason; where she bursts out of nowhere with an argument that you know nothing about. The best thing for you to do is to remain calm; don’t interrupt, listen and only speak once she is done. Argue or dispute your innocence in a calm tone when she is done talking.

It’s your woman; you should know her moods by now. So when you see that she's looking to get angry - act quickly. Remain calm and say something nice to her like “you look cute when you are trying to look angry” This will break her attempt to continue… now notice that smile on her face!

When you are both in the middle of a storm; remain sober. We all know it’s not your fault and you have done nothing wrong, however swallow your pride or ego and apologise.

Although it will eat you up inside, it will save you a whole lot of energy and emotional stress.

4) Maintain what you started

Men tend to do all sorts of things to get a woman; but once she’s hooked, the standards drop. Maintain the standards or you won’t hear the last of it: “Babe you used to buy me flowers, babe what happened to you, to the chocolates...etc.”

If you did something wrong as a man, always make sure you come clean. If you are caught in the wrong, don't lie and insist that you were tricked. Give a sincere apology and admit that it was a mistake.. This can go a long way to save your relationship.

A quiet woman is a dangerous woman. If you did something wrong and she does not talk about it, initiate the talk to get it out of the way. The reason for doing this is because one day she can pull that hand grenade out of her ammunition box and that won’t be a nice day to face hell. It's game over.

7) Be willing to lose arguments

Since you know your woman doesn’t like to lose an argument; be willing to lose a few. Vying for the upper hand all the time will not help your relationship in the long run. You can’t win them all.

If you have a friend that is also a woman - who is not your partner, tell her that the 7pm and later calls should never be entertained. It’s your time with your woman so make it count.

Best solution; put that phone on silent or switch it off. This will avoid your partner from  looking for 'clues' to accuse you of cheating.

You love your child right; so prioritise your time. Your current lover should not suffer because every time the baby mama calls and says the baby misses you. Make time for the baby and your current lover. If you must, organise those family dates for all of you. But don’t let either of them compete for your attention. It will be less drama for you. With blended families becoming the norm, the modern woman has new scenarios to deal with, help her out.

Lastly go with the flow, chances are good that the craziness will blow over at some point in time.