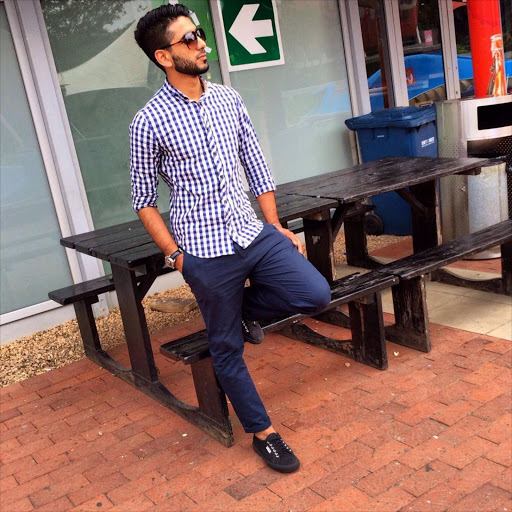 Zaakir Randeree was a cowboy in bootleg jeans and farm boots‚ but when he entered the corporate world he felt it was time to up his game.

So he hung up his boots and transformed himself with a slick haircut‚ a manicured beard and a growing interest in fashion.

“It took me quite a few years to get out of my long hair and scruffy beard but eventually I came out. Now if you see me you won’t even recognise me‚” he says.

Randeree‚ like many other South African men‚ has embraced the art of grooming.

“You see those beard oils. Two years ago you couldn’t get them‚” says Nick Tindale‚ as he sits in a barber’s chair getting his beard shaped‚ looking up at a shelf packed with little bottles of the stuff.

What Zanderee and Tindale are enjoying is the expansion of the male grooming industry in South Africa.

In April it reported several trends in South Africa:

- “Premium men’s fragrances saw the strongest current value growth in 2015 over the previous year‚ with an impressive increase of 23%.

- “A high-quality scent is increasingly associated with career and social success‚ while premium men’s fragrances are also an increasingly popular gift for men.

- “Men’s razors and blades (are) seeing volume sales stagnate‚ chiefly due to strong competition from electrical men’s shavers but also partly due to a growing fashion for beards in the country.”

Mo Begg‚ owner of The Gentleman’s Beard Club‚ an online store and line of beard care products‚ is watching the trend closely — in two years his beard care line has grown from one product to eight.

“Due to the way in which we package our products that give them a gift-like appeal‚ we have noticed a steady increase in The Gentleman’s Beard Club‚ even internationally. To date we have agents in Barbados and Zambia and have exported to individual clients in Canada‚ Australia‚ UK and USA.

“Local retailers and barbers from time to time contact us to become stockists‚ so this is a good indication that we are doing the right things to become noticed in the male grooming market.”

While the number of men using Begg’s beard oils are increasing‚ he is also selling to women.

“Believe it or not‚ females have also started using The Gentleman’s Beard Oil for their eyebrows and this has helped speed up follicle growth.

“Our data analytics indicates that females are also spending a lot on the store (website) and our sales come from a mix of males and females. A customer’s average spend per order is around R520‚ mostly during the week.”

Monique Fleming‚ owner of barber and beard care line Bonafide Beards‚ got into the business in 2014 when she wanted to get a practical gift for her husband.

“My business plan was to make my husband a gift. He had started growing his beard. My husband is originally from America so he understood beard grooming. He asked me to go find him either a beard balm or a beard oil.

“I made it my mission that day to go and find it because I love his beard‚ I love facial hair‚ and I didn’t want him to shave it. When I went out to find a balm or an oil there was literally not a single person who knew what I was talking about.”

Fleming considered importing products from the USA for her husband‚ but with the pricey exchange rate she decided against it.

Noticing that many of the balms and oils she had researched were hand-crafted‚ she decided to give it a go herself.

“I then started thinking about this gap in the market. He’s not the only guy with a beard who needs products. I made a small batch and tweaked it the second time around. He absolutely fell in love with it and said ‘babe you should sell it’.”

Fleming started sending out samples to friends with beards and in just a few months saw her online orders soar from 10 to 60 per day.

Fleming‚ who believes being a woman in this industry gives her the edge over her competitors‚ also find women purchasing her products.

“Men listen to women‚ who are exceptional groomers.”

At her barbershop in Parkhurst‚ Johannesburg the average client spends between R300 and R1500 per visit.

Barber Mohammad Ali‚ from Pakistan‚ has moved to South Africa to take advantage of the growing market. He works at a barber in Rosebank‚ but plans to open his own “posh” shop soon.

“I owned a barbershop with my friend [in Pakistan]. I moved here to make business.”

Ali‚ who considers himself an expert in Arabic beard styling‚ honed his skills further in South Africa where he learnt how to thread hair.

At Freedom Hair Barbering & Coffee‚ in the Johannesburg suburb of Melville‚ barbers are also being trained in threading‚ as more men seek alternative hair removal methods.

Waxing and threading‚ traditionally used by women in South Africa‚ are now being offered to men in barbershops and salons catering specifically for them.

According to Moipone Mphirime‚ a therapist at Sorbet Man in Sandton‚ the offer is being met with great enthusiam.

Mphirime sees about nine gents a day‚ with many of them visiting her before they go to work‚ on their lunch breaks or after hours‚ and she loves working with the guys.

“They’re very simple. No bitchiness. And they’re very loyal customers. They trust whatever you tell them. They come to see you for help and that’s what they’re expecting.

“The strangest [request] was when they asked me to [wax] their back‚ sack and crack. If we don’t do it for them who else will help them?”

Her colleague‚ barber Sammy Adedayo‚ has been in the industry for 20 years and says it has changed dramatically in recent years‚ with men seeking more than just a standard cut.

“Many guys are conscious about their look … many come every week just to make themselves look good.”

Adedayo says men prefer being helped by women therapists in the salon but barber Fatima Sholanke finds her skills are often questioned by men because she is a woman. Despite this‚ she finds men are easy-going clients.

“I actually started grooming both female and male but then I got fed up with females. I’m a female‚ but we are full of (rubbish). So I decided I can’t take it anymore.

“Guys are much easier to approach. Their demands are not crazy.”

Tindale says that grooming has become a frequent topic of conversation in his friendship circle.

“In my circle of friends a haircut is not just a haircut.”

Men like Tindale and his mates are seeking quality‚ clean cuts in a comfortable environment.

Where he gets his hair cut at Freedom Hair‚ that is exactly what he gets – a good cut without the fuss.

“I can come in‚ feel fresh‚ look good‚ but I don’t have the rest of it‚” he says‚ referring to chatty women’s salons.

Freedom Hair owner Boydon Barnardo started focusing on men about seven years ago because “guys weren’t being looked after“. His barbershop has become a second home to men like Tindale‚ playing rock & roll during the week and hip hop on Fridays.

Randeree‚ who has waved his scruffy appearance goodbye‚ says he has become all-round groomer and that his confidence has grown in the process.

“You get two different types of guys. You get the cavemen who don’t worry about their hair or their beards. They put anything on. They leave their beards to start covering their lips. Their beards are all over the place. Then you get the ones that take pride in the way they look.

“It’s nice when you get noticed. When you’re in a crowd and guys come up to you and say‚ ‘I like your beard.’ Then you know you are doing something right.” — TMG Digital