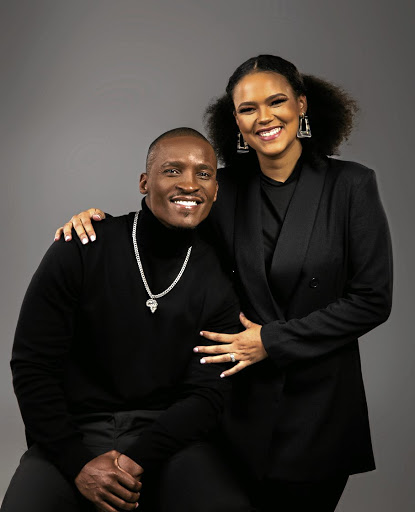 If "love lives here" were a couple, it would be Phumeza and Mnqobi "Shota" Mdabe.

The pair is stepping back into the limelight after a five-year hiatus that was triggered by their last-born son Mpilo being diagnosed with stage 4 eye cancer in 2014.

During the turbulent period and as medical bills piled up, they were forced to scale down on their lavish lifestyle and luxury cars. The hard times also meant that they lost friends in the entertainment industry.

But their strong bond and love got them through it all.

"We are reclaiming our lives. We have waited so long and we have been through a lot. We are ready to go back to doing what we love," says Shota.

"It's become a school of life. What strengthened our bond was that other people were just not there.

"The business calls dry up and you look around and discover you are left with no one but her [Phumeza]," he says.

"You wake up every day and you don't know if he [Mpilo] is going to lose his life or not.

"We decided to dedicate our time and love to him, but that came with its consequences," recalls Phumeza.

Mpilo was diagnosed with cancer at 16 months old. His right eye was almost immediately surgically removed.

Doctors tried to save his left eye, but they eventually removed it. Mpilo now has artificial eyes.

"The first time he lost his first eye it was disastrous. You look at this honest kid a night before and you realise the same time tomorrow he won't be looking like that. He doesn't even know it," says Shota.

"But our son is our hero. He was the one that was going through the operation and chemotherapy. He would vomit and the next moment he is playing.

"At the hospital, he was walking around with the drip and he didn't want to rest," recalls Phumeza.

How cancer impacts on family lives

The family of entertainer and TV personality Phumeza Mdabe has had to overhaul their lifestyle after they found out that her son Mpilo has cancer. ...
Good Life
4 years ago

They did not have a big, lavish wedding ceremony. Phumeza, 32, says they will have one in the future.

"I want a big traditional wedding. I want it to happen for us when we are comfortable," Phumeza says.

The couple is releasing a new love song, Jabulisa, next Friday to officially mark their music comeback.

"This is where we started and it's kind of a fresh start again. It's a new chapter and dawn," says Phumeza.

"It's a love song and we are just celebrating ourselves. When you are faced with such a challenge you don't see light at the end of the tunnel," says Shota.

"We want to testify to what love can put you through and what you can come through. Maybe it will take five years like us, but hang in there.

"It's a journey, carry on with life," says Phumeza.

Phumeza is currently heating up the small screen on Isidingo.

The last time Phumeza released new music was in 2011, and she misses performing live the most.

Very close to the couple's hearts is the Mpilo Foundation, named in honour of their son and aimed at supporting children with special needs.

They plan to build a school for blind children through the charity organisation.