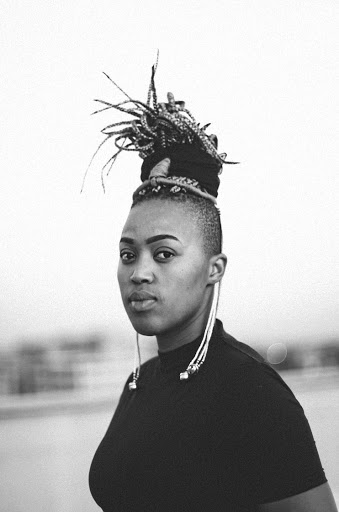 Msaki and Tresor will be to blame for the baby boom that the country will experience nine months post winter.

Their romantic smash hit Sondela puts you in the love mood faster than peaches and cream.

The lyrics are perfect for a love-struck Instagram caption, while Msaki's siren voice puts a spell on you to complete the aphrodisiac effect.

Sitting across from me on election day, with her signature side-shaved topknot, Msaki, 31, explains the songwriting process for the tune.

For starters, it only took two hours in studio with Tresor to pen the seductive lyrics.

"I think I was in the groove that day. What was on my mind that day was the idea of being in love with a super introvert," she explains.

"My partner is an introvert, so I wrote it with him in mind, and similar people.

"People call them things like arrogant, boring and whatever. So I wrote this song about a slight extrovert being in love with an introvert.

"That my smile might come easily because I'm a friendly person but it actually belongs to you."

Real name Asanda Lusaseni Mvana, she is also topping music charts with house tracks Fetch Your Life, with Prince Kaybee, and Wish You Were Here with DJ Black Coffee.

But for those who recently discovered Msaki, don't be fooled into believing that she's a newbie.

"There is a home for me, but it has always been niche and I'm quite well known in terms of the underground live space. But this is a new territory for me," she says.

The indie-folk singer independently recorded and released her debut EP Nal'ithemba in 2013.

Her solo album Zaneliza: How the Water Moves dropped in October 2016.

We chat with singer-songwriter Msaki about her musical journey.
S Mag
2 years ago

"The title says a lot because of where I was geographically while writing it. It's just about urban flow," she says.

"Prominent themes on the album are hope and loss. The theme of hope is going to be a common thread in my music."

She has also written songs for Lady Zamar, Tresor and Simphiwe Dana. As far as her career as a ghostwriter goes, she refuses to name drop.

"I have signed non-disclosure agreements with some," she said.

The East London-born star's music career has been a kismet journey - for years she ignored her calling.

After high school she studied law at Nelson Mandela Metropolitan University but she dropped out after a year.

She went on to obtain a qualification in graphic design and a degree in fine art at Rhodes University.

"I have a sister that can sing until you cry," she brags.

"My voice is very subtle and simple. It's just a tone I'm comfortable with.

The proud mother of two will this Sunday perform at the Mother's Day concert, alongside Mafikizolo, at the Bandstand of the Joburg Zoo in Johannesburg from 11am.

And as a mother, she looks forward to soaking up the atmosphere and to celebrate her own victories rasing her children.

"Motherhood has been amazing. It changed me. You just can't take yourself seriously."

"My kids are so funny and creative. I'm kind of blown away," she says.