Men on a mission for day of love with a conference 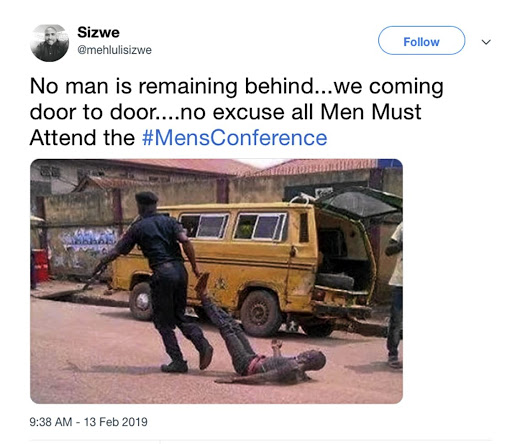 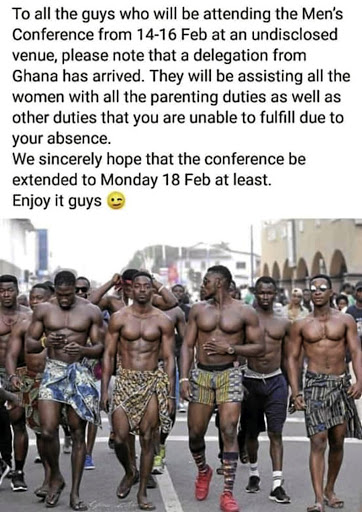 The fictional gathering hosted by the imaginary Chavo Rezus took the thunder from under cupid's cute nose and put men's resistance against all things red and white at the forefront.

Social media was abuzz with memes and videos of men heading to the nonexistent summit, as an excuse for not indulging their partners on Valentine's Day.

The programme read like the who's who in the gallery of shame and was curated with the tongue firmly in cheek.

Pastor Mbhoro would have opened day 1 with a prayer followed by a "size competition" between controversial former home affairs minister Malusi Gigaba infamous for his "imagine this in your mouth" while stroking his, er, generously proportioned member and at the other end of the spectrum rapper Emtee who shared a video of his not-so-
intimidating weapon.

Durban kwaito star Mampintsha had been secured for a No Abuse Presentation which would have been followed by Lunch + Weed + Alcohol.

The heavyweight drawcards would have been former president Jacob Zuma with his talk on Why Polygamy? and EFF leader Julius Malema sharing his secrets to a new svelte figure. Performers included Kwesta, Sjava and Black Coffee taking the delegates to the evening reception.

Day 2 would be opened by pastor Sthembiso Zondo, who notoriously flashed his family jewels in leaked video that went viral, followed by Nico Matlala's talk on paying papgeld. MetroFM's DJ Fresh and Mo Flava were put down to share advice on "how to say no when she asks for money", while Gigaba, the obvious conference headliner, returns to teach "how to seduce her using video".

Successful day at the conference gentlemen. I would have loved to stay longer but duty calls.

Memes littered social media as users milked the conference for all its worth, from pictures of them getting ready at home to gridlocked traffic on the highway headed to the conference.

Pouring cold water on the conference, Palesa Mbape, legal and advocacy manager and People Opposing Women Abuse (Powa), said: "They created the fake conference to see if they can get all the attention."

While no comment could be received from St. Valentine, the founder of the day, because he was reportedly sulking, many men who made the conference an excuse to bail out of chocolates and roses put up with a cold and lonely night, but woke up to fatter wallets this morning.

Social media users have declared a #MensConference. It will be held this Valentine’s Day, February 14 2019, and the tweets will have you in stitches.