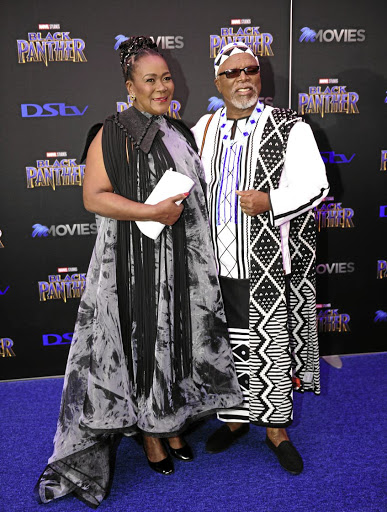 Black Panther has made Oscars history.

The Marvel Comics film, starring in the lead Chadwick Boseman, Michael B. Jordan, Lupita Nyong'o and Danai Gurira, is the first superhero feature to receive a nod in the coveted best picture category at the awards.

"We are very excited, it is historic indeed. We knew it was coming, especially after it was nominated at the Golden Globe Awards," John told Sowetan.

"We broke box office records, everyone is asking for a sequel and now [we] have seven Oscar nominations."

Chiume, who plays the role of a tribe elder of the fictional African mining nation of Wakanda, added: "We have a sense of pride that we were part of the cast; but above all greatness.

"I'm very proud and excited about these nominations. With our local industry, because it's not so big, they come a time where you feel like you have reached the ceiling but after Black Panther and how it was globally received; you feel proud that your name is out there and hope you will be noticed no matter how small your role was."

John served as language and cultural consultant on the set of the Ryan Coogler-helmed film.

"It is all incredible and we are just happy to be associated with the roles we played. We played a critical role in the culture and language," said John.

"As a result you find that in the film isiXhosa is Wakanda's indigenous language.

"We are very proud. Everyone is saying a nomination is good enough, but I want to win."

Some still believe #BlackPanther was "all hype and no substance". And that it shouldn't be up for an Oscar.
Entertainment
3 years ago

John continues to fly the SA flag high as he will next star in Disney's live action remake of The Lion King alongside Beyonce and Donald Glover.

He will voice the role of Rafiki when it hit theatres in July. He revealed to Sowetan that he just finished shooting a film called Murder Mystery with Adam Sandler and Jennifer Aniston in Canada, Italy and France.

"Even there [The Lion King] you will find some African languages spoken. I always try to influence the roles I play.

"It's going to blow everyone's minds. Lebo M is still involved with the music and it's absolutely brilliant," he added.